Amazingly it is nearly a year since Double Standards first performed at the Hen & Chicken, between the first two lockdowns. This was rapidly followed by a trip to Crescent Studios in Swindon to record CD "Release" which has been out since the start of 2021 - however, tonight has turned out to be the first possible date for the recorded line-up to meet and perform again, hence a rather tardy CD launch, or possibly relaunch.

The CD has been played on the BBC Radio's "Jazzworld with Linley Hamilton" and on JazzFM, besides receiving some great printed reviews -
“Hague in particular is a memorable soloist, technically adept, melodic and muscular, and funky or pretty as required.” – Chris May, All About Jazz
“A very classy offering from Hague, featuring some accomplished original writing and some absolutely terrific playing from all four participants. A fine album delivered from the throes of lockdown.” – The Jazzmann
“As crisp and incisive as we have come to expect ... Hague himself is on excellent form throughout, his improvisations packed with agile and well-wrought phrasing” – Barry Witherden, Jazz Journal
“Hague has a knack for writing good solid swinging modern jazz that never strays far from its roots.” – Nick Lea, Jazz Views
“this record exudes the type of group interplay, spontaneity and flow that can only be realised when a band is in one room recording together, listening to each other, reacting in the moment.” – Denny Ilett, London Jazz News
“Highly recommended” – Lance Liddle, Be-Bop Spoken Here

Andy Hague – trumpet/flugelhorn. Over the past 25 years Andy Hague has become well known in Bristol both as a performer and as organiser of weekly jazz venue The Be-Bop Club. Besides his jazz activities he has played in many other settings, including the albums by Portishead and for theatre, tv and film productions. In 2016 he appeared as part of the Pee Wee Ellis and Fred Wesley Back To Jazz Big Band, performing at Bristol Jazz and Blues Festival and Ronnie Scott’s Club. 2017 saw repeat appearances at both venues as part of a big band backing USA trumpet legend Bobby Shew in a programme celebrating the centenary of Dizzy Gillespie’s birth.

Jonathan Taylor – piano. Jonathan Taylor is based in London, where he co-runs the junior jazz programme at the Guildhall School of Music & Drama. He is a founder member of one of the UK’s leading tango ensembles Tango Siempre, a group which has featured guest appearances from prominent jazz musicians such as Iain Ballamy, Gilad Atzmon & Steve Arguelles. He also helped to create West End show Midnight Tango, featuring “Strictly” dancers Vincent and Flavia, and was musical director for their show Tango Moderna in 2017.

Henrik Jensen – double bass. Originally from Denmark, Henrik was based in London from 1997 but has recently relocated to Frome from where he is now picking up a lot of work in the South West. He appears in our autumn programme several times with various groups, and also as band leader with his own Followed By Thirteen.

Gwilym Jones – drums. By far the youngest member of the group, Gwilym received the coveted Tony Levin Award whilst studying at Birmingham Conservatoire, and has since gone on to complete an MA at Trinity Laban. Becoming recognised as one of the most exciting young drummers on the scene, Gwilym has toured with pianist Olly Chalk's trio and in November 2020 presented his own trio project at the EFG London Jazz Festival with saxophonist Mark Hurrell and bassist Sam Ingvorsen. 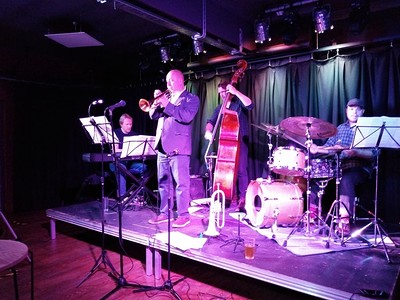