Dubplate session, this dance is set to be an opportunity for insight into the ancient bags of legendary selectors playing through their longtime nurtured sound systems.

Room Two:
HARD PRESSED HIFI
HALYCONIC & G ROOTS (Moonshine Recordings)
DUCK & COVER SOUND SYSTEM
Roots Injection is a Bristol based Sound System keeping the UK Dub scene very much alight in the city. RAS Muffet’s presence alongside Shaka in the 70s, and running Wolverhampton’s Jah Marcus Sound in the 80s was a precursor to the launch of their digital dub label in 2004 (for which we are all grateful). Conducting the dance in original style and fashion,keeping the ever inventive Bristol music scene in touch with its’ roots, the Roots Injection crew are trusted each and every time to keep the boxes warm and drums energetic as ever. Recently found giving Aba Shanti-I a run for his dubs at Teachings, and blessing the Sound Meeting arena at this year’s Dub Camp Festival, they reach to teach Old & New Roots from their label, friends and far beyond for this special Bristol session.

We have longtime Bristol Dub scene veteran Jah Lokko to thank for the birth of Dub Club itself. Running his Sound System in Bristol since the 1980s, from the dancehall era and through to that 90s Steppers we know and love, his system has seen dances upon dances, carnivals upon carnivals and clashes along clashes, all the while supporting local underground and emerging artists to find their feet in the scene. You may have seen the Jamaican flags putting out high hats on over roots for Unique Star, just off City Road (check photos if you don’t believe it) at this year’s Carnival, but this time Big D of Jah Lokko takes to the decks and stack for a more heavyweight, strictly Dubplate Session. Hidden vocal cuts and steppers from the higher planes Don’t miss the treats and where he sends them!

Formerly known as Enterprise Sound System, Papa Roots have been making their mark on the Bristol dubwise scene for more than 20 years. Expect to dubs deep from decades of collecting music as well as new school.
All tribes welcome. See you in the dance. 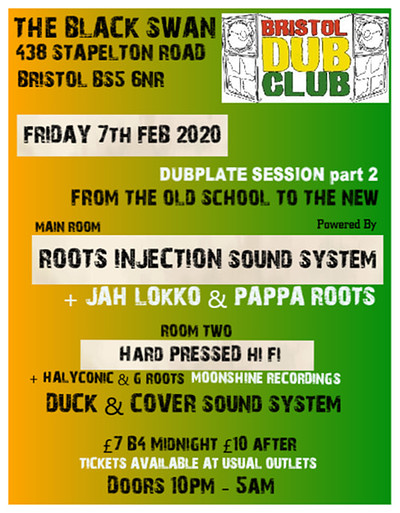