Finally back this September with a day & night 15 hours sound system party with loads of guests!!

----------------------------
NOMADIX
Asha Nomadix is a roots and dub producer with studio based in West London. His first works came out in the mid 90s, with a couple of releases that crossed the lines between hardcore rootical dubwise vibration and ambient dub explorations.
He has had several releases out since then, some on Roots Revelation Records, on Word Sound & Power and more on Vinny Kullar’s Roots Youths label. He remains an in demand dub producer, whose music will set a dance alight.

RAS MUFFET
Ras Muffet has been active as a producer on the UK reggae and dub scene since the 1980s and these days.
In the 1970's he was part of Jah Shaka's crew, he then went on to start a sound system called Jah Marcus that played successfully across the north and the midlands. In the beginning of the 80's he started the Fari Studio, and began focusing on his production and studio side more. Ras muffet regularly releases music on his label and has been supplying many of the names you see today with exclusive music.

SHERE KHAN
Shere Khan is a London based selector, radio host, label owner and full-time foot soldier in the Dub Vendor squadron. With a weekly show on London's LIFE FM, the Jungle Cat has been circulating dubwise at a high velocity for over 8 years. Shere Khan has played all over Europe and even as far as South America’s Columbia and throughout the UK. The Jungle Cat offers up an undiluted, raw, minimalist sound, having plyed his apprenticeship and absorbed inspiration through the Channel One Sound System Academy. Also currently working at Dub Vendor and with the launch of his record label, Shere Khan Records, many exciting ventures are in the works.

Bristol Dub Club is a home-grown roots sound system night welcoming not only big names, but also some of the most exciting underground talent in roots, dub and steppers. Every month two sound systems meet, or a selection of Selectors & Artists perform at the Black Swan to bring pure vibes, express their unique sounds and uplift the crowd.

Looking forward to seeing you on the 14th !

Keeping Dub in the Cabinet since 2008 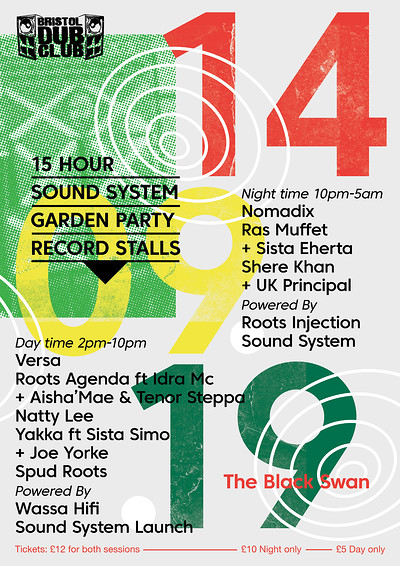