— The Black Swan
We’re back with our biggest line up to date! We’ll be ramming the Swan to the brim with the hottest acts from the melting pot of Neurofunk!
time:22:00
price: Headfirst Tickets

Who’s ready for round 3 of Donk sucking then!?

We’re back with our biggest line up to date! As you already know we’ll be ramming the Swan to the brim with the hottest acts from the melting pot of DnB/Neurofunk talent!!

With some of the finest acts from the UK, and indeed across the world there’s some of everything for everyone - we’ll be bringing you the creme de la creme of artists, plenty you’ll have heard of before; and some that you really want to keep your eyes and ears on!

Don’t leave your dancing boots at home for this one ;)

As if the insane main room line up isn’t enough we’re more than happy to announce the return of both the Korridor of Karnage (hosted by Karnage sound system) as well as The Bombsite (Hosted by Napalm sound system).

The Korridor never disappoints, expect ruthless kicks, snares and bass from your favourite residents with smiles and good vibes all round from the Karnage Kru!

Those of you that visited The Bombsite last time know what to expect - mad levels of infrasub and a stellar line up!

All 3 rooms of the Swan will be rinsing out insane levels of sound pressure all night long - with a whole roster of your favourite artists and tracks, new and old, from far and wide!

Keep those oranges of yours peeled for…

Influenced heavily by the likes of Bad Company, Noisia and Ed Rush & Optical, the collective formed back in 2007, bringing together a myriad of styles into one slick package to take the scene by storm with huge releases on a host of prestigious labels including Virus, Vision, Audioporn and most recently SGN:LTD.

Their breakthrough release came in 2009 on DJ Trace’s legendary DSCI4 label while their collaboration with Body & Soul on Ed Rush & Optical’s Virus Recordings took their profile to the next level with support from all corners of the globe. Since then Ludwig, Lukas, Dominik and Nik have travelled the globe as their renowned DJ sets continue to set dance floors alight with their own trademark take on drum & bass.

With remixes of the likes of Noisia under their belt, and support from names such as Friction, Fourward have become a pillar of Neurofunk. Expect nothing but the best from one of the heavyweights of the genre…

Formed of Tobias and Jakob, Neonlight are one of the most highly regarded production teams in Drum & Bass. Known for their killer blend of musicality, attitude and sheer creativity, this German based duo have, in a very short space of time, featured on labels including Bad Taste, Trust in Music, Viper, Eatbrain, BSE Recordings, RAM and Blackout, who they are now exclusively signed to. These high profile releases, alongside collaborations with some of the best in Drum & Bass royalty, have secured an impressive discography and an international fan-base. Now a byword for unique, precise Drum & Bass, Neonlight are constantly in demand, touring the world and adding further credentials to their impeccable back-catalogue. Their previous releases have received huge support from the likes of Noisia, Spor, and Ed Rush & Optical who included 3 tracks on their FabricLive Mix CD.

This unstoppable duo are constantly furthering their upward trajectory - you won’t want to miss this performance!

Joe Ford is a man on a mission, ready to shake up the world of D&B and beyond with his own unique brand of bass music destined for dance floors across the globe. Hailing from Harrogate UK, Joe leads a new wave of producers currently taking the scene by storm, setting himself apart with an already outrageously accomplished studio skill set and trademark hi-tech drum & bass sound tinged with rock, funk and everything in between.

With a flurry of activity around early releases on Bad Taste, Med School, a Beatport dubstep chart no.1 with the Mission EP on Caliber Music and huge support on UKF, Joe Ford is one of the most exciting talents currently in electronic music, worldwide. Picked up by Friction and K-Tee, Joe now sits as an exclusive Shogun Audio artist alongside one of the most prestigious rosters in the game.

After his stint as support act for Noisia’s I Am Legion tour, his debut Shogun track 'Stride', from the Way Of The Warrior 2 compilation album, marked his arrival in style. Continuing throughout 2014 with his downright dangerous ‘The Moment’ ft Tasha Baxter b/w the effervescent ‘Neon’ release and a remix for one of the biggest USA EDM’ers in the game, Datsik, he sealed the year with ‘Off Centre’ and knocked us all for six. In fact his rework of ‘Hold It Down’ forced Datsik to exclaim “Joe Ford is the future!” in a recent interview…and who are we to argue.

There’s no doubt Joe Ford is coming to conquer, you’ve been warned.

Having burst onto the scene late 2016, the brand new collaborative duo Magnetude have established themselves as a dangerous new force in the game, with their extremely impressive debut release titled 'Hyperdrive' on Lifted Music. The forward-thinking production duo consisting of Rusty K & Jae Overtech set the bar high from the outset with their dynamic approach to Drum & Bass, incorporating a vast array of melodic intricacy, live orchestral and opera elements, that have many critics hailing them as 'the breath of fresh air the scene needs in such a stagnant market'.

Though primarily focussed on Drum & Bass, the project explores diverse territory alongside Russian vocal sensation Julia Marks and apply their production finess exploring the depths of Dubstep, Breaks, Half-Time, Bassline and Grime, which also accompanied by high-octane 4 turntable sets, affirms their position as one of the most exciting artists on the rise destined to make a big impact in the Electronic Music world.

With their recent releases such as “Signals”, “Snatch” and “Entra’cte” they’ve proved their salt and cemented themselves as a serious contender and an upcoming act that you won’t want to take your eyes or ears off of!

DnB Kitchen resident and all round badman Mozzy will be tearing out some hefty deep & dark rollers for this instalment of Suck My Donk! Make sure your gut is ready for a rumbling ;)

Owner of Karnage sound system Cold Illusion is no stranger to the decks.. Prepare yourselves for neurofunk and hard dnb with a sprinkling crossbreed! With tight mixing and hefty tune selection this is definitely an artist that you don’t want to miss!

Twin brothers and Neurofunk DJ’s hailing from Bristol, with their reputation for knowing everything that makes the genre inside and out you know to expect a ruthless selection of the heaviest DnB the scene has to offer - don’t miss them making their Suck My Donk debut!

Tesler is a Bristol based DJ, residing in the darker, heavier end of the neurofunk spectrum while making sure to reflect the versatility of the genre throughout his mixes. Influenced by the likes of Merikan and Gydra, he’s sure to bring an arsenal of showstoppers with him for this event!

No thugs, no mugs, no drugs 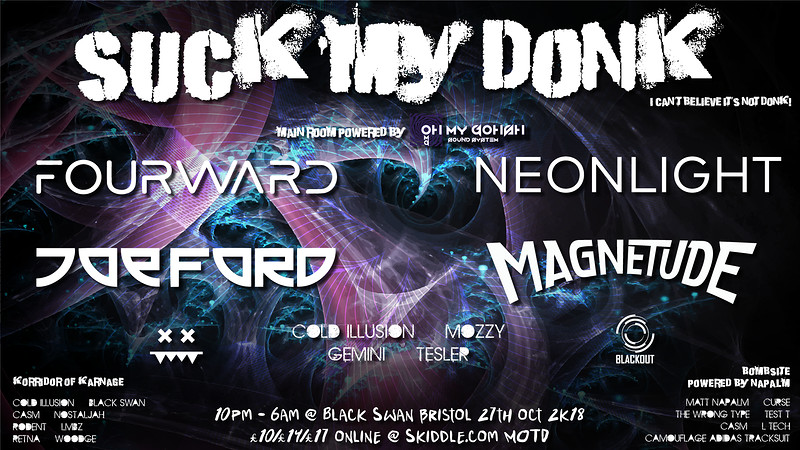 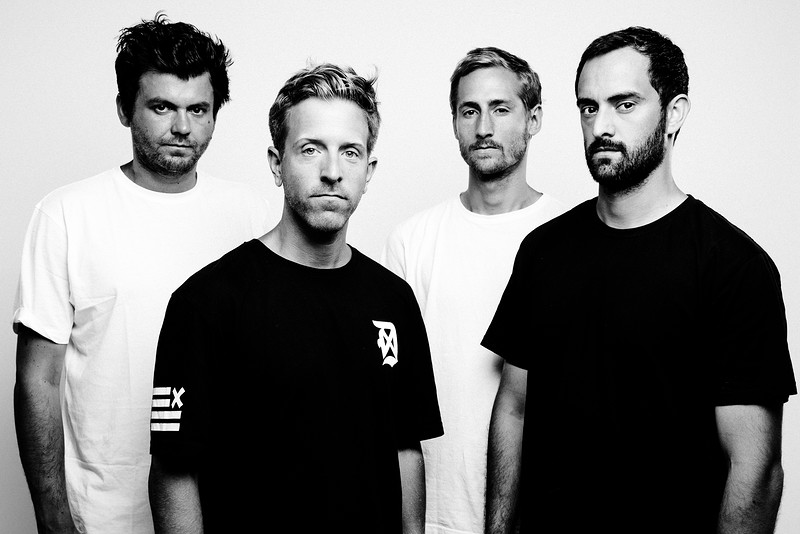 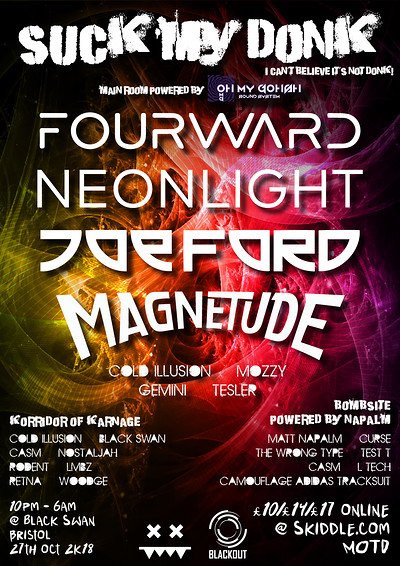