Balkan, Latin & urban styles blend together to create an explosive mix unique to Chile’s Insultanes. Mixing the colourful clamour of carnival with the somber resilience of the suburbs, Insultanes have been making waves up and down their home country for a few years now, launching their debut album “Sonido Volcánico” in 2018.

Originally from Mexico, Gypsy Box has resided in Spain for years, where he has set himself apart as one of the pioneers of the Balkan-Cumbia scene in Europe. A tireless traveler, he has already toured half the world carrying this Latin-Balkan signature sound and making everybody move on the dance floor. 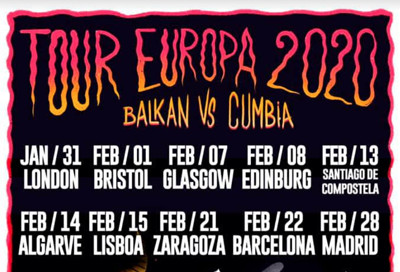