Three Bristol artists are joined by Constanza Brncic - a Barcelona based dancer and choreographer who has collaborated world wide with, amongst others, the company Raravis (Andrés Corchero and Rosa Muñoz, 1996-2009) and with Malpelo dance company (2002-2005). She was soloist dancer for The Magic Flute, choreographed by Min Tanaka and stage direction by Piere Audi, at Salzburg Festival, 2008; and premiered her solo 'What is the Word' at the Grec festival in 2017. She has also collaborated extensively with musicians such as Agustí Fernàndez, Joan Saura, Nuno Rebelo, Ferran Fages and Dimitra Lazaridou-Chatzigoga.

Matt Davis is an artist who makes kinetic sculptures and audio/visual performances. Often using manipulated and cracked electrical objects to create light and sound which might act either as signals, or systems, which are broken or are misbehaving. These can also incorporate field recordings and radio signals from the immediate environment

Dominic Lash is a freely improvising double bassist, although his activities also range much more widely and include playing bass guitar and other instruments; both writing and performing composed music; and writing about music and various other subjects. He plays or has played with musicians such as John Butcher, Joe Morris, Evan Parker, Pat Thomas, and Nate Wooley, and performed with the late Tony Conrad and Steve Reid. 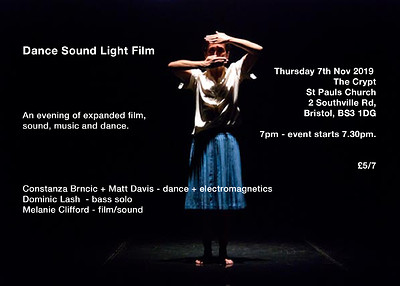