— The Fleece
HENGE is a band of extra-terrestrials that bring with them the sacred sounds of Cosmic Dross – a musical form known in other parts of the un
time:08:00
price: Headfirst Tickets

“All ages (under 16s must be accompanied by an adult)"

Please note there are a few different types of ticket on sale for either the afternoon Matinee or the Evening show. The matinee there are various deals for adults & under 16s all on this ticket link. Please email info@eartrumpetmusic.co.uk if you need to clarify any ticket information.

HENGE is a band of extra-terrestrials that bring with them the sacred sounds of Cosmic Dross – a musical form known in other parts of the universe that has, until now, never been heard on Planet Earth. There are no human words to adequately describe the Cosmic Dross experience.

HENGE have come to Earth in the name of rave to spread their message of love and harmony. Since their landing, they have been so well received by the human species that they won Best Live Act at the 2018 Independent Festival Awards. Their debut album – on this planet at least – ATTENTION EARTH! was released at the end of last year.

EVIL USSES formed in the summer of 2013, the band met at Dartington College of Arts but cemented their musical friendship during a psychedelic fishing trip in the wilds of East Anglia. Finding themselves without a vehicle and only their rods and a collection of cheap harmonicas for survival, the delusions of parallel robotic selves from the future became their only reality. Soon after, they relocated to a disused library in Bristol and began experimenting with transcendental bird fighting, effects pedals and bio-degradable chorus lines. After a series of open air performances incorporating gymnastic feats and the amplified drones of slow cooked roadkill, the group hunkered down in the library, learnt to play their instruments and set off on an ill-fated tour of motorway service stations across the south-west of England, brought to a dramatic end by their unfortunate incarceration by the Wiltshire police. 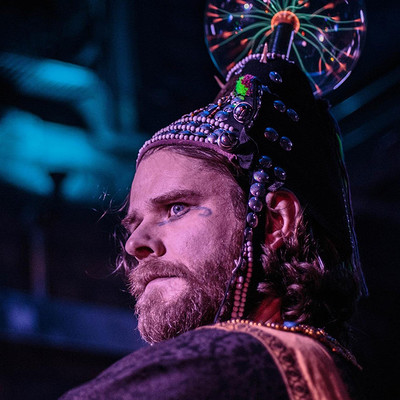