The Evil Usses an experimental psych four-piece from Bristol who have been praised for their almost overwhelmingly wild and energetic live shows with a sound somewhere between Captain Beefheart's Magic Band, Tortoise and Cardiacs.

Having met as part of the final cohort to attend the legendary (and sadly now defunct) experimentalDartington College in rural Devon, Conrad, Dan, Leon and Lorenzo played together in various other styles and permutations before forming The Evil Usses. They now find themselves embedded within Bristol's boundlessly creative BLOOM collective.

Their eponymous debut saw them working with Jim Barr (Portishead/Get the Blessing) and their second album Amateur Pro Wrestling was produced by Deerhoof guitarist John Dieterich. Both records have sold out on limited edition colour splatter vinyl. Their third release, the 10” mini-album Muck (also produced by Dieterich), was released in April 2018 and sees the Usses stretching the envelope of their playfully warped vision of sonic reality.

Since forming in 2013 they have been supported by Bristol indie label Stolen Body Records. They have shared stages with the likes of Melt Yourself Down, The Comet is Coming and Sons of Kemetand and they have recently embarked on a couple of major European tours (bringing their joyful noise as far as Greece and Croatia) in support of Muck. 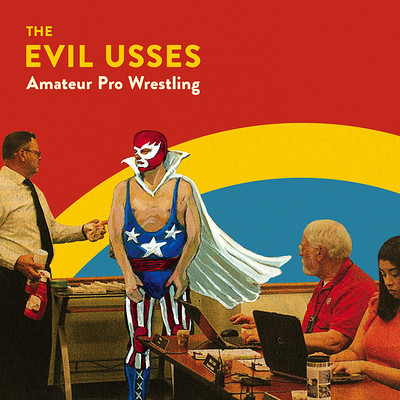