A Very Smutty Christmas on tour at The Greenbank

Join Marcia D'Arc - aka Mrs Smutty Claus, just touched down from the North Pole, as she entertains you with her own smutty and saucy versions of popular Christmas songs!

Gather around her festively adorned stage piano, for an evening of irreverent renditions, and risque rhymes, which will set your bells a-jinglin' to New Years and beyond!

She might even have the chance to answer a few agony-aunt letters, doling out some sage yet suspicious advice to the lonely and blue this Christmas.

In 2018 Marcia took her one-woman show 'Songs of Smut and Sparkle' to the Edinburgh Fringe festival:

“Thank you for an amazing evening of Smut and Sparkle! Had me in stitches. 5 stars. 10/10 on the SMUT-O-METER” - Dale Adams, Edinburgh Review.

In 2017 Marcia performed her first feature length version of 'A Very Smutty Christmas', and this year she's taking the new and improved show on a little tour around the Southwest. 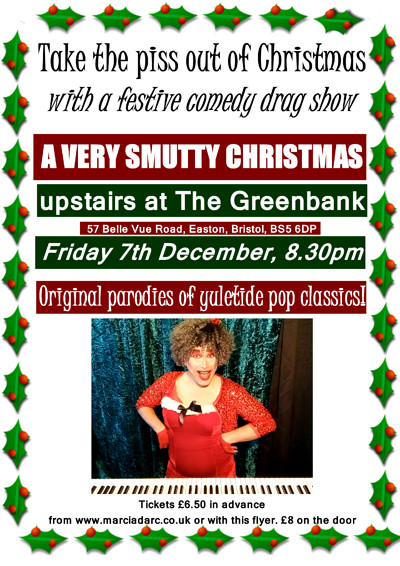