— The Island
Out of this world electro brought to you by the alien boogey commander Volruptus
time:22:00
price: Headfirst Tickets

Bringing you the BASS from outer SPACE!! 2 YER FACE!! The unruly and groovy. The sneaky, freaking and hailing from the outer solar system. Volruptus' star ship is on course to make first contact with earth on the 8th of June, with the current landing site forecasted as The Island in Bristol. He is on a mission to make you move!

Recently described by XLR8R as "one of techno's most mysterious figures", the alien boogey commander, 'Volruptus', has been making huge waves since first bursting onto the scene in 2016. Following several truly out of this world releases on Bjarki's 'bbbbbb' and Nina Kraviz's 'трип', Volruptus has been going from strength to strength, solidifying his reputation as one of the most unique and exciting producers currently around! We are delighted to invite Volruptus to Bristol for the very first time to preform a 90 minute live set of relentless, alien, brainwashing frequencies!

Support on the night will be provided by Dock34 residents Conneely, Point3 and Aaron Andrews. 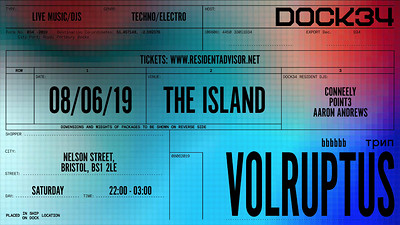