A QUICK NOTE REGARDING TONIGHT.

WORM DISCO CLUB AIM TO PRESENT SOME OF THE MOST ENJOYABLE MUSIC BASED EXPERIENCES ON OFFER HERE IN BRISTOL. IN A CITY WHICH HAS A STRONG LIBERAL AND POLITICAL CORE, WE FEEL A LOT OF PEOPLE WILL BE SUFFERING TODAY. IN 2019 WE HAVE (UNINTENTIONALLY) HOSTED EVENTS ON TWO 'BREXIT' LEAVING DATES AND THEN TODAY. WE ARE AS SICK OF IT AS EVERYONE ELSE, THAT SAID WE HAVE A PARTY /GIG WITH TWO GREAT ACTS TONIGHT, SO WE HOPE YOU CAN COME AND LET OFF SOME STEAM, DANCE AND INDULGE IN WHAT WE HAVE PREPARED FOR YOU! LIFE, AND INDEED, THE SHOW, MUST GO ON! - WDC x

Dan Leavers aka 'Danalogue', the keyboard/synth wizard that is one third of the mighty 'The Comet Is Coming' is a tasmanian devil in disguise. A head-banging supremo that produces levels of live synth euphoria unrivalled since Liam Howlett first smashed up a stage. The levels of energy, skill and MASSIVE sound he produces always leave us with our jaws on the floor. For this special presentation he's teamed up with two (secret) musician friends from the legendary Total Refreshment Centre studios to play a live interpretation of an amazing document and cult classic re-issue album.

Charanjit Singh recorded his 'Ten Ragas To A Disco Beat' in 1982. Hailed as acid house recorded in India several years before house and techno became properly established in the USA, the listen-ability, production and fluidity of this record rivals that of the masters such as Juan Atkins, Phuture, Aphex and Vibert.

This album is a killer artefact that still continues to give and give upon repeated listens and we think Danalogue is the ideal modern musician to treat us to a LIVE performance of this very fun record.

Cykada are a 7 piece tornado of horns, guitars, drums and synths. Only one other band out there in the landscape of the rising UK jazz movement (that being The Comet Is Coming) can compare in terms of the energy and mash up of styles on offer. Combing electronic and psychedelic elements with global inspiration from West Africa to Eastern Europe, throw in some beats and riddims of soundsystem culture, the spontaneity of jazz and rock heavy riffs and we have a new dynamic mashup unlike anything else out there.

WORM DISCO CLUB DJs will be on both warm up and homerun duties. Jackson, Jake and Nathan will be pulling out lots of new bangers for this one!! 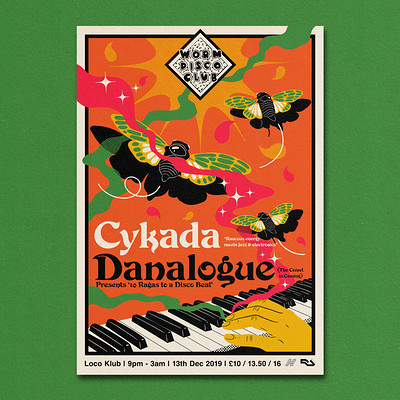