Our monthly slam and spoken word feature night is back at the atmospheric Loco Klub! Come along down to slam or just to watch our swaggering rock chick of a headliner Jackie Juno, whose poetry has been described as 'like a slap in the face from a pink handbag'.

JACKIE JUNO: This month's headliner is primarily a comedic poet, known for her dynamic stage presence and outspoken views on matters political, environmental and social, somehow managing to make such subjects hilarious; but her material can also be tender, sensuous and confessional.

She is a multiple slam winner, including the prestigious Glastonbury Festival Slam 2017, Plymouth Literary Festival slam (2017) and the Green Gathering slam (2016). She was a contender in the National Poetry Slam Finals at the Albert Hall, 2018.

She has performed her poetry at two TEDx Talks.

She has been a finalist in many international poetry and short story competitions, including Arvon, Mslexia, Writing Magazine and the Ledbury prize.

'Jackie Juno's voice will boogie, shimmy and sashay its way into your head -
her words are hellbent and irresistible: listen up!'
Chris Waters, Poet, Through a Glass, Lately, (Mudlark 2014)

'Jackie Juno is the arts school, leopard skin wearing rock chick. Her poetry hits you like a slap in the face from a pink handbag. There is plenty to laugh out loud at here but underneath the swagger is a gentler sensibility that gives the performance a soft heart. Her observations of life are witty, poignant and full of social message.'
Lucy English, Performance poet and novelist

‘Jackie is warm and witty, frank and feisty, but above all, very very funny.’
Matt Harvey, Poet (Radio 4) 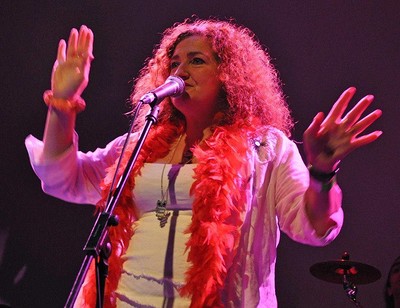