The Man Who Thought He Knew Too Much

Wes Anderson meets Hitchcock meets Spaghetti Western in this fast-paced whodunnit. An intercontinental, inter-genre, cinematic caper of accusations, accidents and accents. Our story follows Roger Clement - a Frenchman in 1960's New York. His days have always followed a highly-predictable, yet not-unpleasant, routine - until a minor delay saves him from an explosion - igniting a powder-keg of twists and turns as Roger chases his would-be assassins around the world to discover the truth. Raucously funny and endlessly inventive, this Lecoq-trained theatre company delights and stuns with live music and virtuosic acrobatics. 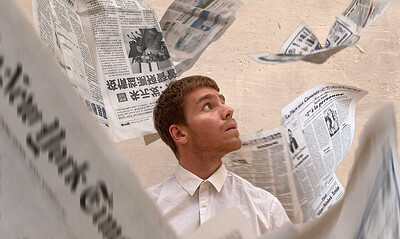