London based saxophonist Colin Webster is quickly establishing himself on the European avant garde scene. Collaborating with some of the key figures in improvised and experimental music, Webster is known for working from extreme sonic palettes – from minimal to maximal, constantly pushing boundaries.
He has put out releases with the likes of Sheik Anorak, Mark Holub and Toby McLaren, Dutch free-jazz duo Dead Neanderthals, and many, many more.

Graham Dunning is self-taught as an artist and musician having studied neither discipline academically. His work explores sound as texture, timbre and something tactile, drawing on bedroom production, tinkering and recycling found objects. He has performed solo and in ensembles across the UK, and Europe, and shown solo sound installations in the UK, New Zealand and USA. He teaches Experimental Sound Art at the Mary Ward Centre in London and also gives various independent workshops. Dunning has released through Entr’acte, Seagrave, Tombed Visions and more.

A prolific artist in many media, Ian’s sonic output is generally derived from an obsession with the mis-use and exploration of electronics and recording formats through improvised performances and recording sessions. He has held Artistic Residencies during Cardiff Contemporary (2014), at Arcade Cardiff, and at G39 as part of their Unit(e) residency programme

All that plus LOVELACE djing inbetween bands 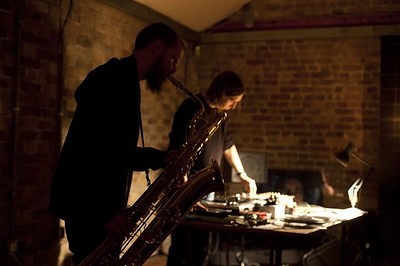