After tearing up Desertfest London with their Sabbath-esque riffs, HIGH REEPER (HEAVY PSYCH SOUNDS) return to the UK for their first tour of the country!

"Formed in 2016, High Reeper is made up of Zach Thomas, Justin Di Pinto, Andrew Price, Pat Daly and Shane Trimble. Originally started as just a studio band, it rapidly became apparent that these songs were meant to be heard live and loud. The band made their debut in the Philly/DE stoner rock scene in early 2017 with success which was followed up by the recording of their self-titled debut in May. With a sound deeply rooted in modern stoner rock while still giving a nod to the earliest Sabbath records, High Reeper's self titled debut is driven by pounding rhythms, thick guitars and soaring, screeching vocals. For their second record, the addition of Di Pinto on drums helped focus their sound in an even more powerful direction. The result is a new record with riffs that are even heavier than before that explore new directions, including the ballad “Apocalypse Hymn”. After a successful 2018 European tour that included Desertfest Berlin, High Reeper Will once again tour Europe in 2019 visiting ten countries as well as an appearance at Desertfest London." 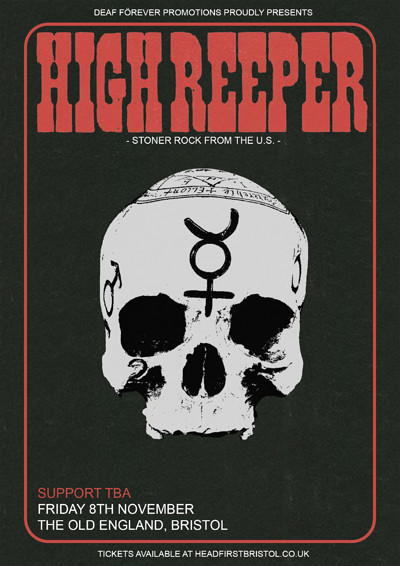