"DOPETHRONE are the kind of humans that eat the blues for lunch and wash it all down with a giant jug of crust punch!
This is one of those bands that will have the crusty punks head banging right next to the stoners, both united under the bad sign of doom." - CVLT Nation

Since their creation in January 2010 GURT have released 2 LPs, 5 EPs, 3 splits (With Dopefight, LIMB & Trippy Wicked) 2 Christmas Singles and a number of sludgy covers.

Relentless touring across the UK and Europe has seen GURT perform with some truly great bands. Highlights include a 23 day European tour with Canadian sludge legends Dopethrone, a 7 day Euro tour with our bros in Diesel King, a 10 day UK tour with our BFFs Bong Cauldron and Pist, supporting Weedeater in Paris, The Sword in Salzburg, Red Fang at the Black Heart and Black Tusk in Paris, as well as performing to packed out audiences at Desertfest 2013 & 2016, opening the 2nd stage at Bloodstock 2014 and triumphantly returning to Bloodstock for another 2nd stage appearance in 2017, playing the main stage of Stonerhead Festival in Salzburg and also laying waste to Hammerfest in North Wales, In Flammen in Germany, FOAD fest in Manchester, Massafest in Holland and Riff Fest in Bolton. 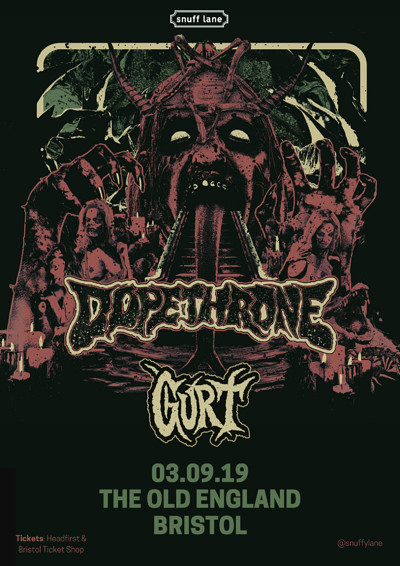