Hypnotic grooves, pounding rhythms and soaring melodies coming to Old Market Assembly to celebrate the release of their new album "Humans"
“A fulsome evocation of Fela Kuti’s continually inspiring blend of The J.B.’s-style jazz-funk horns lashed to a relentless mix of funky highlife and Yoruba, all delivered with aplomb….” – Time Out London
LAC are powered by a promise to continue what afrobeat father Fela Kuti began.
If, as the great Fela Kuti once said, ‘music is the weapon’, then you’ll need to wear armour to withstand the full sonic force of London Afrobeat Collective (LAC) – this politicised party machine are an incendiary live act who channel the spirit of the Afrobeat founder via bass-heavy rhythms guaranteed to make you move.
Their name may include the UK’s capital but their sound goes far beyond the British Isles. From Europe to Africa, Glastonbury to ‘Felabration’, they deliver party-music born of their truly global DNA. The nine-strong collective from England, Italy, France, Congo, Argentina and New Zealand combine Fela, Parliament Funkadelic and Frank Zappa to create an addictive sound drawing on funk, jazz, rock, and dub to create something new and frankly indescribable. 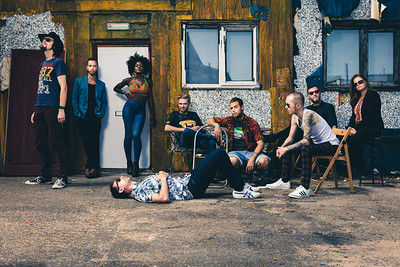