The Rockabilly Knock Out — All Dayer! The Rev. Horton Heat, The Delta Bombers & more! Performances from 7 Top Rockin’ Acts!

Due to the extremely popular demand of the SOLD OUT Friday 8th May 2020 double bill, Rockabilly Night LIVE and Rockin' by the Sea have come together to give you a second chance to experience these iconic American Rockabilly acts live.

In addition to the 2 main acts, we have booked 5 more amazing rockin’ bands to make a 7-band, all-day rockabilly extravaganza! And as if that wasn’t enough, Rockin' by the Sea are supplying the amazing DJ talent to keep the party going in between all the bands. Join us for for 12 hours of never of ending rockabilly madness!

Already have tickets for Friday 8th May 2020? — Make a weekend of it, and get tickets to the rockabilly knock-out at HALF PRICE! To take advantage of this offer and get 50% OFF on your Saturday ticket, send us an email on info@shedevents.co.uk (discounted tickets are not available for direct purchase online and proof of purchase for Friday 8th May 2020 will be required to obatin them)

The Discoveries
This young — but hard hitting! — Rockabilly three-piece band from Derbyshire, names The Reverend Horton Heat among their main inspirations. So who better to get the party started and set the tone? While carrying the torch from Rockabilly legends like Rev. Horton Heat and The Stray Cats, they bring their own fresh take and energy to the Rock’n’Roll genre. The trio took an unusual, but very 21st century route to success; they posted a video on social media gathering over half a million views world wide. That sensation caught the attention of promoters across the UK and Europe, and put The Discoveries on the map as one of the most promising new acts on the British Rockabilly scene. — Arrive early to experience the future of Rock’n’Roll in the UK!

Dylan Kirk & The Killers
His biggest idol, Jerry Lee Lewis, started his career at just 19 years old in 1954. Now a 19 year old Dylan Kirk is following in those legendary footsteps by taking the stage along some of the greatest Rock’n’Roll acts around. But the self-taught Rock’n’Roll pianist from Kent is no stranger to performing live. He has been rocking crowds from behind his piano since he was 15, and perfectly embodies the raw, wild sound of Rock pioneers like Gene Vincent, Ray Campi, Sonny Burgess, Ronnie Dawson, Carl Perkins, and countless others. Dylan Kirk not only masters the classic early Rock’n’Roll catalog to perfection, he also writes his own material that is guaranteed to rock your socks off.

Danny 'O' & The Astrotones
It will not be the first time these four rockers share a stage with The Delta Bombers. Supporting the latter's 2018 UK tour, Danny ‘O’ and co. took venue after venue by storm, collecting rave reviews in the process. Since forming in July of 2018, the Astrotones and their frontman have been on a mission to tear up the cosmos. Armed with riff blasting guitars, out of this world lyrics, and earth-shattering rhythm section, Danny ‘O’ and the Astrotones is taking on Planet Earth with extraterrestrial force! Their debut single, Everyday Chains, send shock waves through the Rock’n’Roll universe, and the follow-up, Paint The Town, received a perfect 5/5 rating in Vintage Rock July 2019. If you haven’t experienced the meteoric impact of this red hot British Rockabilly band, have a listen to their 2019 debut album, Introducing Danny ‘O’ and the Astrotones — you won’t be disappointed!

The DeadShots
Over the last few years, The DeadShots have been lighting up stages and audiences across the country with brilliant original compositions and unexpected covers of both old and new tunes. If you’re not familiar with The DeadShots, do yourself a favour and take a listen to their latest album, Wanted, from 2019. From the first week of its release this potent mix of Rockabilly and Rock’n’Roll got attention and airtime across international radio stations. But it’s their high powered stage show, that really stands out. The starch contrast between the wild shenanigans of drummer, Jack Smith, and the cool and collected style of songwriter and lead guitarist, Billy Jenkins, makes for a powerful two-kick. Joined by vocal powerhouse, Matt Waterhouse, and the bearded beast, Jim Jenkins slapping like a madman on the double bass, The DeadShots are bound to rock your socks off!

Rhythm Torpedoes - WILD Records
These five rockers from Marburg (DE) hit the European Rockabilly scene like a torpedo back in 2011 — and they haven’t shown any signs of slowing down since. Their wild interpretations of 1950s era Rock’n’Roll has earned them a record deal on the American Wild Records label, launching the German torpedo to world wide success. And they are a perfect fit among the top of the US Rockabilly and Country artists. Their “Torpedobilly” sound pays homage to classic Americana genres, but dials everything up to a nuclear level, ready to explode any moment. Luckily, the impact of this torpedo happens in the form of thunderous double bass, earth-shattering drum beats and blistering dual guitar riffs. Add to that the voice of lead singer, Arne Runzheimer, bringing thoughts back to country icons like Johnny Cash, and you have “the perfect weapon” to shake up any seasoned Rockabilly fan!

The Delta Bombers
What do you get if you fuse 1950s Rock’n’Roll with swampy blues, red hot country, and high powered rockabilly? The answer is the highly explosive and by no means safe contraption that has been annihilating stages all over the world for over a decade! This hard touring band has been tearing up crowd after crowd in 26 countries with their take-no-prisoners attitude and super-charged energy, and does not seem to stop for anything or anyone. And they certainly won’t slow down when blowing up The Passenger Shed in Bristol! Their 4 studio albums bear testament to the virtuous musicality of these four rockers, but it’s live on stage that their music really spits flames. From powerful vocal abilities of Chris Moinichen, the scorching guitar riffs of Andrew Himmler, the floor rumbling bass lines of Gregorio Garcia, to the earth shattering drum beats of Micah Malcolm, these rockers will blow you away with their raw, All-American roots music! — Directly from Las Vegas, Nevada, it’s The Delta Bombers!

Reverend Horton Heat
Get ready to be converted to the evangelical calling, as the Reverend Horton Heat preaches the Gospel of Rock’n’Roll. Experiencing these rockin’ tribal shamans produce rhythms, that transcend time from the early 1950s way into the future, will transform even the most hardcore rockabilly fan. Get ready for the revelation of truest form of ecstasy there is; the rockin’ High-Octane, Spaghetti Western Wall of Sound that is everyone’s favourite preachers. With 11 studio albums to date, these rockers from the great state of Texas, have more than put their mark on history: They have slammed into the history of Rock’n’Roll with meteoric force, and pumped pure nitrous into the old hot-rod engine of the genre. When they take the stage of The Passenger Shed, they will surely deliver what they preach, in the form of pure, brain-melting guitar solos, wild stage antics, and plenty of unapologising attitude! Get ready for the sermon of your life!

Event photos for The Rockabilly Knockout: 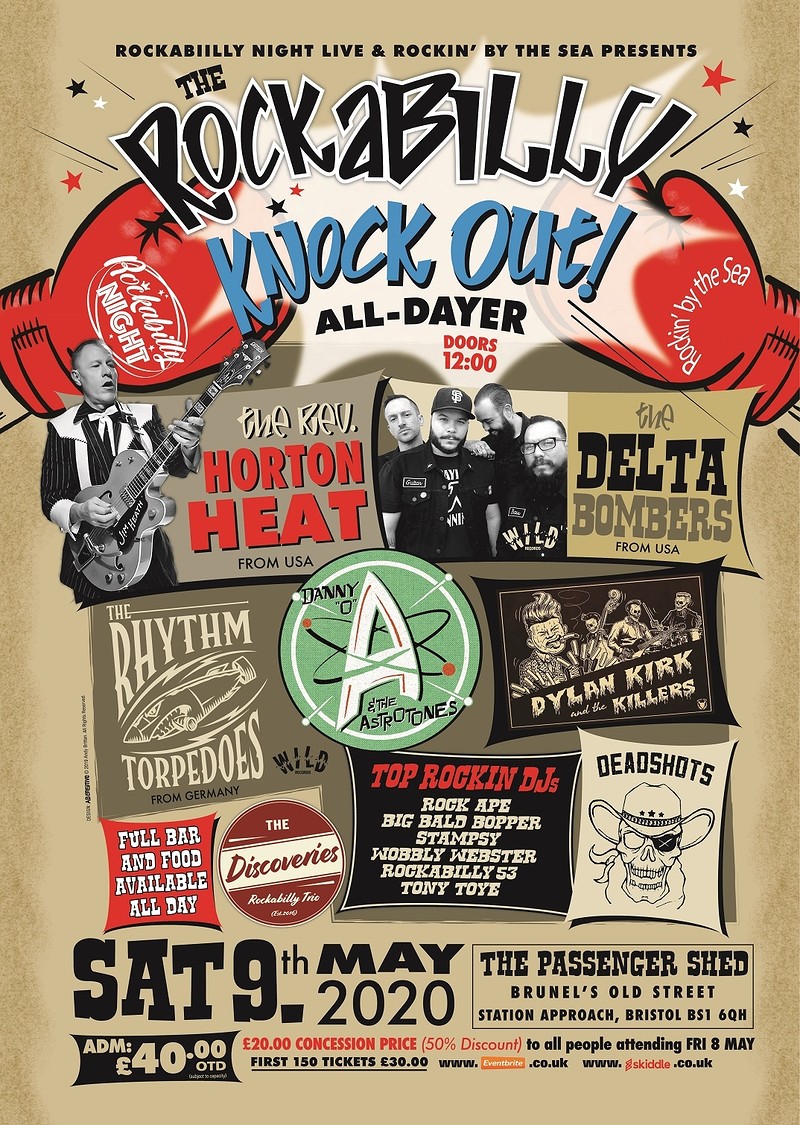 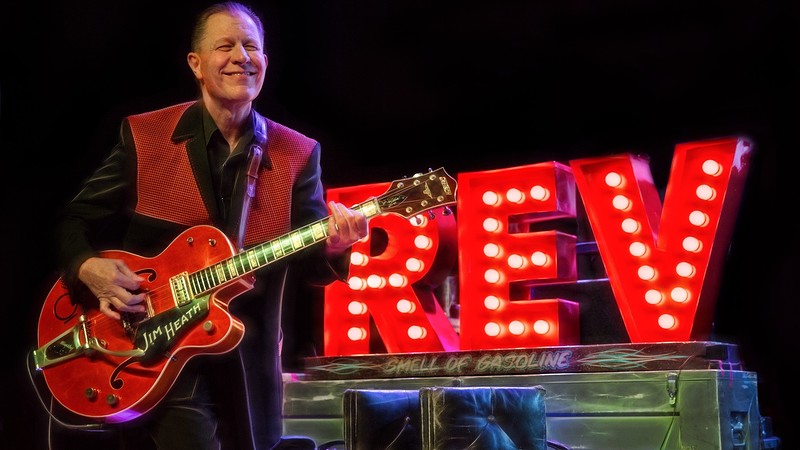 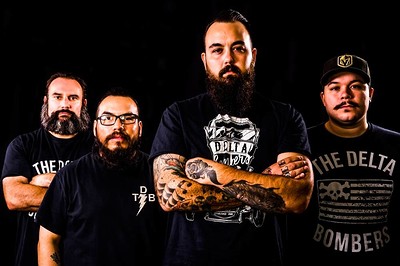