On their own ground

— The Quakers Meeting House, Wedmore Vale, BS3 5HX
Theatre at its most poignant and most thought-provoking
time:19:30
price: Headfirst Tickets

BLACK* artists on the move as part of the Eclectic Clusters programme is delighted to present On Their Own Ground
narrating the stories of three female African-heritage
pioneers who all dared to challenge the power structure in a post-slavery world.
A child of slaves, Sarah Breedlove (1867 – 1917), known as Madam C J Walker,
was the first self-made American female millionaire, selling beauty products for
black women. An innovator, many of her key management staff were women.
Amy Jacques Garvey (1895 – 1973) a pioneering black female journalist, editor,
author, Pan-Africanist and social campaigner. Amy Ashwood Garvey (1897 –
1969), was a flamboyant, co founder of the UNIA, a Pan-Africanist campaigner
and cultural feminist. All three had the vision to change the world
of black women for ever.
Directed by John Sailsman, Amantha Edmead’s multi-layered solo
performance fuses spoken word, movement and song, bringing to the stage the
stories of these three remarkable women. 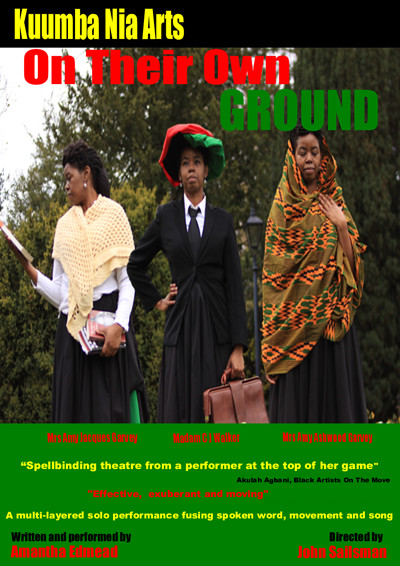