— The Redgrave Theatre
Three of the country's finest stand-up comedians, handpicked from headline slots at the most prestigious comedy venues in the UK
time:19:30
price: Price: £17.50

ZOE LYONS: Star of Live at the Apollo, Mock The Week, McIntyre's Roadshow, The Wright Stuff and The Paul O'Grady Show, Zoe “has what it takes to delight any crowd” according to The Guardian. Awards include winner of the Funny Women Competition and the UK Circuit Comedian (voted on by fellow comedians).

“Always fizzling with indignation and throwing out a hugely enjoyable mix of brutal putdowns and richly funny stories. . .” THE GUARDIAN

“A spellbinding narrative…delightful, impressive and very funny… ✭✭✭✭" The SCOTSMAN

RICH WILSON (MC): Regarded as the UK’s best MC by many top comedians, such as Frank Skinner, Richard Herring and Sarah Millican, Rich is resident at all the major UK comedy clubs (Jongleurs, The Comedy Store, The Comedy Cafe, Big Night Out), has entertained audiences across the pond in New York and, Las Vegas and performed sell-out shows at all the major comedy festivals including Perth Fringe, Melbourne International, Edinburgh Fringe and the New Zealand Comedy Festival.

Come and join the cream of the of the UK and international comedy circuit in a cavalcade of comedy talent. 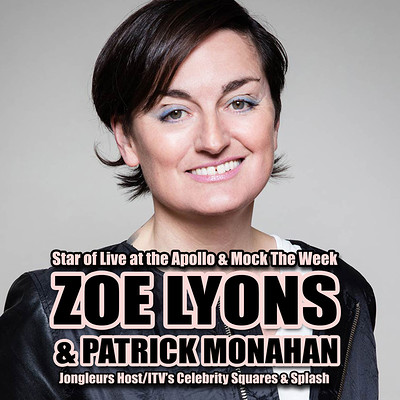