— The Stag And Hounds
An evening of tribal-wave and post-industrial dance.
time:21:00
price: Headfirst Tickets

Gassed to welcome Spanish duo Dame Area over for their Bristol debut. Their ''Centro di Gravitá' LP was one of our favourites of last year, a joint release by themselves and the ever-reliable BFE records label. Stream it all here:

The duo is lead by sass-queen Silvia Konstance Costan. Even at their second live show (to an audience of >15) she was either ducking & diving through the crowd or bashing away on sheet metal, all whilst maintaining her impossibly catchy vocals.

Viktor L.Crux is no stranger to Bristol, having played for us numerous times as either Futuro de Hierro or Ordre Etern. He's also the main figure behind the cult esoteric organisation Màgia Roja. A frequent collaborator with the Gnod-squad and luminaries like Nurse With Wound and Jochen Arbeit (of Einstürzende Neubauten). Harnessing Soviet synths and live percussion, this could be Crux's 'poppiest' work to date...

Since early-on they've had support from the likes of Vladimir Ivkovic, Yamantaka Eye, MR TC & Identified Patient, as well plays on WFMU etc.

Their power lies in the dissonance in their approaches. Pairing respectively; the most prolific and kinetic improvising voice in the City with the most considered composer/synthesist in town makes for a striking contrast.

Exploring themes such as dislocation, the migration crisis and global diaspora, they are a thoroughly contemporary duo.

In the year or so since their inception, they've shared stages with the likes of: Senyawa, Sounds of Sisso, Moor Mother, Guttersnipe and Matana Roberts...

Debut album due in the next few months via the shadowy cabal known as Avon Terror Corps. They perform in honor of those who burn the border & keep indelible marks.

Schwet DJs carrying you through 'til late... 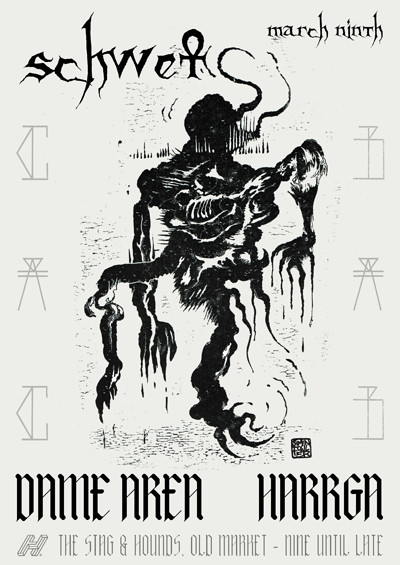