Ben Pope was the Piccadilly Comedy Club New Comedian of the Year Winner 2017 and has placed as a finalist in So You Think You’re Funny and Comedy Cafe New Act of the Year 2015. He started comedy at university where he was the President of the Cambridge Footlights (2013-14) and has been doing stand-up for seven years (as an act and MC). He has toured internationally with the Footlights, and gigs regularly as a stand-up across the UK. Ben has previously worked with the award-winning NewsRevue, and appeared on Comedy Central’s Achievement Unlocked and BBC New Comedy Award on Radio 4 Extra.

He is also one third of the cult sketch group Princes of Main who were part of the line-up at London SketchFest in 2016, host the monthly mixed-bill night Crazy Science Stupid Magic and have had sell-out runs at the Edinburgh Festival Fringe 2016 and 2017. Their critically acclaimed show New Year’s Eve (‘the future of sketch comedy is in safe hands’ – The Telegraph) transferred to London’s Soho Theatre in early 2018.

In 2018 he brought his “classy, stylish and accomplished debut” – Chortle, solo hour ‘Baby Sasquatch’ to The Edinburgh Fringe earning positive reactions from critics, industry and audiences. 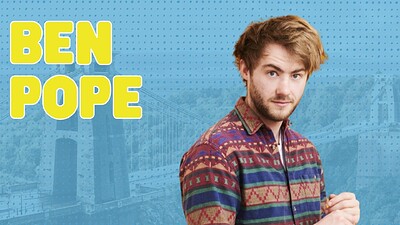