A new show about (aptly) failure and (less aptly) success from a pair of wide-faced scrubs with hearts of gold and heads of sand. Prepare yourselves for songs, sketches and generous helpings of fifth-rate badinage.

“They're stupid, daft, at times nonsensical. Funny yes but daft as brushes. Just how I love my comedy. Thank the stars they went into stand up and not health care.” (Johnny Vegas)

“It was mad, but it was hilarious.” (Tom Rosenthal)
Eric Rushton: I Had A Dream And You Were All In It

Leicester Mercury Comedian of the Year 2020 Eric Rushton brings his highly-anticipated debut hour to 2NorthDown. Ever since he was a little boy, Eric has dreamt of being a commercially-viable stand-up comedian that could effortlessly entertain both you and your extended family. This is his chance to make that dream come true. Expect salty language, sweet facial expressions, and hand gestures with far too much oregano on them. 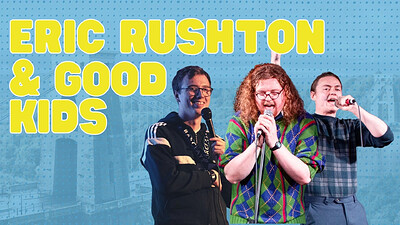