Leicester Mercury Comedian of the Year nominee (2022) Louise Leigh is living proof that a midlife crisis doesn’t have to involve a Harley Davidson and an underwear model (yet).

Since starting to do stand-up aged 43, she’s performed at The Savoy Theatre (Monmouth), the Palladium (Bideford) and the Bristol Hippodrome (actually a giant theatre so shut up!) as well as countless pubs, village halls and comedy clubs throughout the country.

In 2019, she took her show Louise Leigh Identifiable to Brighton Fringe and the Edinburgh Fringe Festival, where in a short run, it got a 4 star review from the Wee Review and was selected as One of the Best things to see on the Free Fringe by Edinburgh Live.

In 2022, she’s bringing a show to Bristol Comedy Festival. and beyond. Currently called A Bloke Called Graeme, quite frankly anything could happen to it at time of writing. 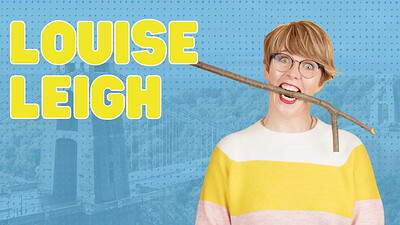