Marlon Davis is a talented comedian, improviser and actor whose recent TV appearances include BBC’s Live At The Apollo and Comedy Central’s Comedy Store Live.

Beginning his career in stand-up comedy in 2005, Marlon Davis made the final of two national competitions Laughing Horse and So You Think You’re Funny at the Edinburgh Fringe Festival the following year, very quickly and firmly cementing his status as a rising star on the comedy circuit.

Marlon has supported Kevin Bridges, Michael McIntyre and Alan Carr on tour and is performing at clubs, arts centres and theatres all over the UK. Marlon’s act is inspired from his upbringing, exploring urban Britain tackling its social issues with skillful characterisations.

‘Bursts on to the stage like a breath of fresh air, with impish grin, boyish enthusiasm and an effortlessly open, confident style’ - Chortle 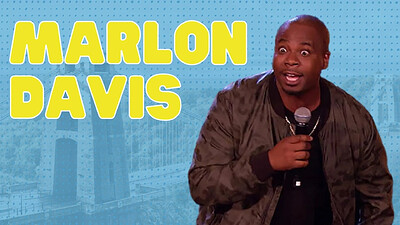