— the Trap (The Crown Bristol) 10 All Saints Ln, Avon, Bristol BS1 1JH,
Neo Tokyo Is Back. A Night of Raving Anime & Gaming with free glow sticks and whistles and goodies.
time:21:00
price: £5 on the door (free goodies)

Neo Tokyo Is Back.

A Night of Raving Anime & Gaming with free glow sticks and whistles and goodies. With more lasers and bass it's the kawaii rave party that Bristol needs. The best cosplay will win £50 with runner up prizes for second and third. Neo Tokyo will present its next event, on Saturday 18th April in Bristol, at the Trap at The Crown pub in All Saints Lane It will run from 9 p.m. until 2 a.m. next morning. Two DJs will play a mixture of anime music, JPOP and EDM, UK Hardcore & J-core
Hard-Trance & Video Game Remixes. The event has a Facebook page here.
The event is restricted to over-18s, and ID is required. Entry price will be £5 for attendees with free Goodie bag, Glowsticks & whistles
Special Guest Dj`s

_D-ice & Reality_
Bristol`s no 1 duo from Delerium to HTID to Hardcore Heaven these two have been at the forefront of the rave scene. This will be the boys' first time at a cosplay rave. They're going to play some classic clubland extreme hardcore anthems to get the party rocking.
DJ ADGER
Our new resident DJ and host ADGER will play a mixture of electronic beats. He was the man who set up Wonkey Eye productions and raised money for cancer charities. He has come back to the DJ game and will act as the night's host and help with the cosplay contest.
DJ FLB b2b Johnny Reaper
The creator of Neo Tokyo Garry FLB will go b2b with johnny reaper of J-con for an anything-goes set get your requests in :)

The Duo play geeky anthems and remixes of video games and more it is a comedy act with drinking games on the dancefloor and all kinds of bonkers things happening.
Games Section

BlazBlue: Cross Tag Battle
A 2D crossover fighting game developed and published by Arc System Works, released on PlayStation 4. The game initially features characters from the BlazBlue, Persona 4 Arena, Under Night In-Birth and RWBY franchises. Battle it out with your friends to see who the champion is.
Cards Against Humanity
Cards Against Humanity is a party game in which players complete fill-in-the-blank statements using words or phrases typically deemed as offensive, risqué or politically incorrect printed on playing cards.
If you can beat our team at the game you win a free drink :)
Bucket of Doom

When the shit hits the fan you need a plan. Escape from seriously bad situations with the help of seriously useless objects.
Other Bits

A TV screen showing Japanese commercials and anime. More lasers and glow sticks and UV effects. Friendly security and bar staff.
£5 on the door £3 before 10 pm
Free Pizza`s at midnight hay raving is hungry work we gotta look after you LOL 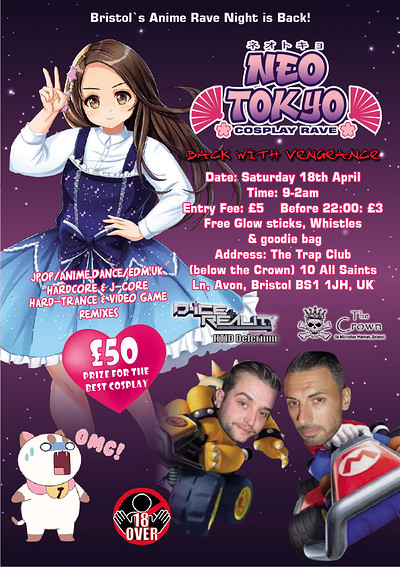