— The Wardrobe Theatre
Angeline Morrison is a vocalist, songwriter and multi-instrumentalist who believes in the inherent beauty of sad songs.
price: Tickets Below

Angeline Morrison is a vocalist, songwriter, multi-instrumentalist and morris dancer based in Cornwall, who believes in the inherent beauty of sad songs. Angeline’s homespun sonic aesthetic, deeply emotive writing and layered vocal harmonies are all stitched together to make small, tender, often dark stories in song. This Black History Month sees the release of Angeline's new album "The Sorrow Songs: Folk Songs of Black British Experience". The UK's historic Black presence is evidenced but not well known, and difficult to find in the UK's existing body of folk songs. This album is the result of research into the historic Black population of these islands. It is a work of re-storying, of lives and of experiences, into songs in the folk style. The Sorrow Songs band are: Cohen Braithwaite-Kilcoyne (anglo concertina, vocals), Hamilton Gross (violin, vocals), Clarke Camilleri (banjo, guitar, vocals), and Angeline Morrison (vocals, autoharp).

Musician and singer-songwriter, Germa creates an ethereal tapestry of rich vocal and stringed harmonies, influenced by the overlapping identities with culture and musical styles. Her recent song-writing and compositions are strongly rooted in her Haitian heritage. A strong undercurrent of social consciousness is at the heart of her music, with a desire to shed light on the stories of women and a desire to explore themes of the past and the modern-day. Germa Adan was born in Les Cayes, Haiti, lived in the USA, and currently resides in Birmingham. 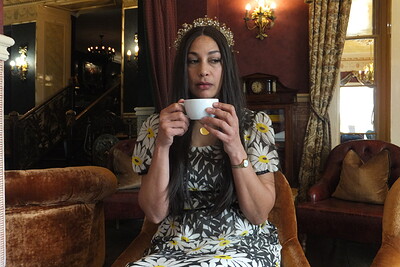