Louisiana-born singer-songwriter and multi-instrumentalist Gill Landry creates gritty, blues-inflected folk tunes, with a rootsy Southern American charm.
He joined Old Crow Medicine Show in the early noughties following the hiatus of founding member Chris Fuqua, staying on after his return and bagging two Grammys in the process.
Releasing his debut solo album in 2007, he followed it up with the self-released 2011 album ‘Piety & Desire’ which saw collaborators include the likes of Brandi Carlile, The Felice Brothers, And Jolie Holland. He’s described as a songwriter who “bares his soul through a deeply personal, elegant collection of tracks that functions like a song cycle of heartbreak,” (ThankFolkForThat).

Joe Strouzer sings songs from his travels from Newcastle to New Orleans and a hell of a lot of places in between. His driving resonator guitar is coupled with true harmonica voodoo and biting original songwriting of modern trouble, heartpains, moonlit trysts, drinking and devilment, peppered with a rich history of blues.

"Where in the world did a limey kid from the U.K. get the nerve,and the talent to sing the blues like he had roots in the 1930's Mississippi Delta. I am happy to know that Joe Strouzer has the soul and the talent to keep the blues alive" Leroy Martin, Swamp Pop Legend and Louisiana Board of Music. 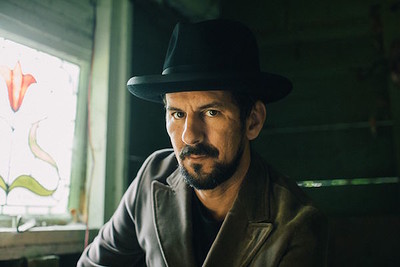