Born out of a musical interest in both British folk and the Transatlantic connections to new country and Americana, this trio are fast gaining a reputation across the UK folk scene.

From toe tapping folk to haunting ballads this trio have toured worldwide as independent musicians but obviously have an infectious enjoyment for this new collaboration that is guaranteed to leave audiences with a smile on their faces.

Kate Bramley is a fine singer and instrumentalist, best known as fiddler and vocalist for the North-East’s Jez Lowe & the Bad Pennies and the American band Sweetgrass.

Edwina Hayes’ beautifully written songs, charming stage presence and voice of an angel have won her a reputation as a true natural talent of gentle folk-Americana.

Guitarist and singer Simon Haworth played bass with Jez Lowe & the Bad Pennies from July 1998 until March 2004 touring in Holland, Belgium, Denmark, Australia, USA and Canada as well as extensively across the UK.

Admission on the door £5 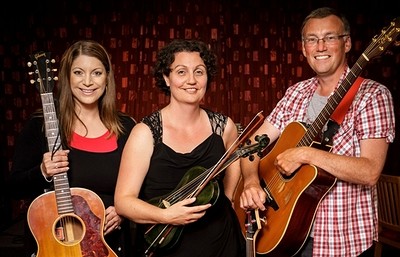