The Science Delusion by Rupert Sheldrake

In his bestselling book, The Science Delusion, first published in 2012 Rupert Sheldrake shows how the ten principal assumptions of contemporary science have hardened into dogmas that are being superseded by the advances of science itself.

In 2013 his TEDx talk on the subject of this book was ‘banned’ by TED after protests from militant materialists, but was posted on other sites throughout the internet and has now had more than six million views, attracting more comments and discussion than any other TED Talk.

On June 25th a new updated edition of The Science Delusion is published in the UK, in which Sheldrake shows that recent advances in the sciences have strengthened his points. In this talk he will summarise some of the principal themes of this book and discuss new findings that take the arguments further, including the fact that the so-called fundamental constants of nature have continued to vary; that new research on epigenetic inheritance shows that the old ‘selfish gene’ idea is hopelessly outmoded and acquired characteristics can indeed be inherited, contrary to the dogmas of Neo-Darwinism popularised by Richard Dawkins, that evolutionary theory is now in turmoil and a new extended ‘evolutionary synthesis’ is emerging that takes into account the inheritance of the effects of parents' experience.

Mice inherit the fears of their fathers and grandfathers even if they are conceived by artificial insemination. Sheldrake will also discuss the reproducibility crisis that has engulfed science over the last 5 years: it turns out that the majority of scientific papers in peer-reviewed journals cannot be replicated. As we are learning through the COVID pandemic, ‘the science’ is not made up of the unquestionable truths. This event will be led and hosted by TalkBox and will be followed by a live question and answer session which all ticket buyers can participate in.

Dr Rupert Sheldrake is a biologist and author of more than ninety technical papers and nine books, including Ways to Go Beyond and Why They Work. He was a Fellow of Clare College, Cambridge University and a Research Fellow of the Royal Society. He worked in India as Principal Plant Physiologist at the International Crops Research Institute ICRISAT and also lived for two years in the Benedictine ashram of Fr Bede Griffiths in Tamil Nadu. From 2005-2010, he was Director of the Perrott-Warrick Project for the study of unexplained human and animal abilities, funded from Trinity College, Cambridge. He is a Fellow of the Institute of Noetic Sciences in California and of Schumacher College in Devon, England. He lives in London. His web site is www.sheldrake.org. 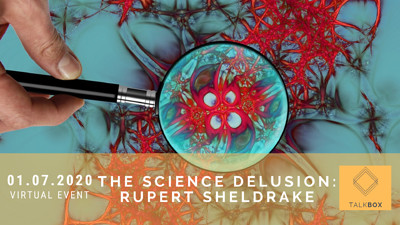