The Land's Heart Is Greater Than Its Map

— Walking tour, Bristol City Centre
An emotional, cartographic resistance piece by Ramzi Maqdisi & Olivia Furber. Who has the right to claim the history of places and objects?
price: Headfirst Tickets

“Walk these familiar streets with new revelations; travel distant lands in your mind's eye. An ode to disappearing places and invisible cities - The Land’s Heart is an innovative and unforgettable performance via a 70 minute psycho-geographical audio tour of Bristol. ”
Join the Headfirst mailinglist for recommendations.

A BSL-interpreted performance of this work takes place on 15 May at 15:00.

Content notes: The piece contains sensitive material and references to violence. The headphone soundtrack includes some loud and sudden sounds. You will have access to control the volume yourself.

There is a far away city which cannot be named. Its people are silenced and its landscape is disappearing.

In this distant city, daily life is stranger than fiction: you can see the sea but are forbidden to touch it, being honest is illegal and those with ancestral connections to the city are forbidden to enter it.

Propelled by a need to tell the city’s story before it is forever forgotten, a resident records the stories behind his favourite places.

This alternative guided tour allows you to wander through the streets of his hometown. Your journey to this distant city will take place within the streets of Bristol and requires only comfortable shoes and an open imagination.

The content of the stories that our resident tour guide will tell you are not what you might expect; they do not focus on historic landmarks and holy sites. Instead his chosen 'stops' on the tour are at the hidden and seemingly insignificant areas and sites of memory that one holds dearly when the threat of exile and erasure hangs over your head.

An emotional, cartographic resistance piece which actively questions who has the right to claim the history of places and objects and how we can imaginatively salvage shrinking landscapes.

The artistic concept was initially conceived through a research workshop in 2018 with Meta Theater, Villa Waldberta and IETM.

The piece was developed with the support of The British Council, Hoch X, The Albany, Ensemble 52 and the Blast Theory Residency Programme and premiered in London at the Barbican centre in August 2021 as part of Shubbak Festival. It was also part of the pilot Horizon programme in 2021 - an international showcase celebrating visionary performance made in England.

Ramzi Maqdisi is a Palestinian filmmaker, writer and actor. His work addresses the minute and everyday aspects of life under occupation. Using subtle, subversive and visual storytelling, he seeks to convey an experience of the overwhelming nature of occupation through zooming in on the tiny details that we all, as humans, share. Ramzi began his professional career as an actor in the Palestinian National Theatre (2000-2005) and went on to work internationally with theatres such as The Nordic Black Theatre (Norway), La Invenció (Spain) and Khashabi (Palestine). As a director he has staged numerous works at at the Palestinian National Theatre and his work as a writer has been produced by Northern Stage (Here is the News from Over There) & Ensemble 52 (Aviatrix). His film acting credits include Ghost Hunting (Winner of the Berlinale Prize for Best Documentary), Omar and The Attack. Ramzi is co-artistic director of Quds Art Films; a collective of artists from Europe and the Middle East covering multiple disciplines including film, theatre and installation. Their theatre work has been produced by the Palestinian National Theatre and recent film projects have had global festival releases as well as airing on BBC Arabic and Al Jazeera.

Olivia Furber is a theatre director and writer working across theatre and installation; indoors, outdoors and in places you weren’t expecting to find her. She trained in movement direction at Opera North and has gone on to direct, assistant direct and deliver dramaturge work for York Theatre Royal, London International Festival of Theatre, Ensemble52 and Theatre Hullabaloo. Her work focuses on borders (both those which are written into the mind and drawn into the ground) and how humans find ever-ingenious ways to cross them. From 2012-2021 she was co-artistic director of Ivo theatre with whom she created a heterogeneous mix of theatre, live art & VR that was fierce, rigorous and sideways in form and content. Their work has been produced with partners including The National Theatre, Almeida Theatre, The British Council and IETM.

Headphones are sanitised before each use.
The route will be wheelchair-accessible and the piece lasts approximately 70 minutes. You'll just need comfortable shoes and appropriate clothing for any potential wet weather. The piece is performed in English. 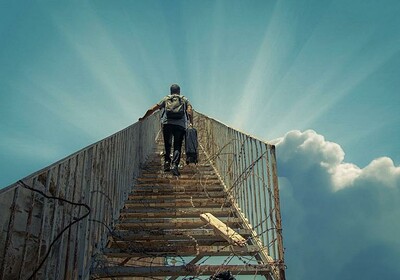