Raise the Bar’s final event of an incredible 2017 will be topped off with Palestinian poet and activist Rafeef Ziadah, and current UK Slam Champion Toby Campion!

Hosted by Craft-D and Connor Macleod.

With its regular monthly slot at Watershed, each Raise the Bar show promises to be a completely different and unique experience.

There is also an open mic for any budding poets with just 8 spaces, first come first serve on the door.

Rafeef is a Palestinian spoken word artist and human rights activist currently based in London, UK. Her performance poetry gained great popularity for its passion, honesty and beautiful imagery, with her poem ‘We Teach Life, Sir’ viewed over one million times on YouTube. Her live readings offer a moving blend of poetry and music, and since releasing her first album Rafeef has headlined prestigious performance venues across several countries, with powerful readings on war, exile, gender and racism.

We Teach Life, her second album, is a powerful collection of spoken word with original music compositions, which she brings to the stage with Australian guitarist and We Teach Life producer Phil Monsour. Rafeef received the Ontario Arts Council Grant from the Word of Mouth programme to create her debut spoken-word album Hadeel, dedicated to the Palestinian youth. She regularly conducts spoken word workshops with the aim of empowering expression through writing and performance. She was chosen to represent Palestine at the South Bank Centre Powers Olympiad in 2012.

Toby Campion is an award winning British poet and playwright, born and raised in the Midlands. Toby is a UK National Poetry Slam Champion and a World Poetry Slam finalist. Recipient of the Silver Wyvern Award and First Place in the Poetry on the Lake Prizes 2017, awarded by Carol Ann Duffy, Toby has performed his poetry on stages across the UK, from Glastonbury Festival to London’s Royal Albert Hall, and in countries around the world, including America, Italy, Spain, Albania and South Korea. His debut play, WRECK, won the Fifth Word Theatre Award for Most Promising Playwright 2015.

Director of UniSlam, Resident Artist at Camden’s prestigious Roundhouse and UK Young Artists Ambassador, Toby was one of the first resident poets of the River Thames. His poetry has been featured on national networks such as BBC Radio 2, Channel 4 and ITV and has been selected to represent the UK at numerous international conferences and events including Capturing Fire: International Queer Poetry Summit, the 18th Biennale of Young Artists from Europe and the Mediterranean, the Paris Poetry World Cup and Next Generation Speaks.

“The voice of a generation” – BBC Sunday Politics


"Raise The Bar exemplifies how spoken word has no fixed style—from the conversational to the melodic, the comedic to the poignant." - Epigram 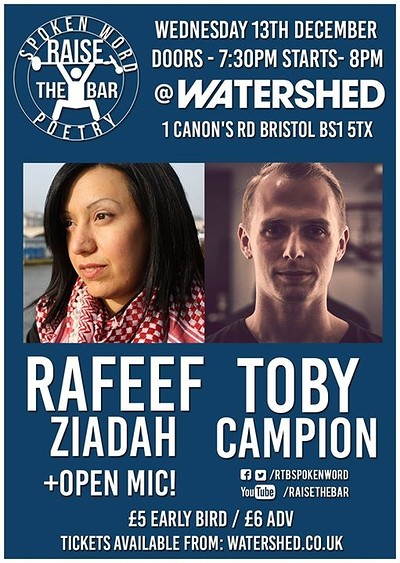