— Zed Alley
We're BACK! After our sold out comedy gig in 2019, we're bringing you another star-studded night of the UK's best trans talent!
price: Headfirst Tickets

We're BACK! After our sold out comedy gig in 2019, we're bringing you another star-studded night of the UK's best trans talent right here in the South West!

Featuring:
DIAN CASTEL
Our host for the night, Dian Cathal, is a queer creative from New York, just trying their best not to get deported.

"Cathal... brings a brand of comedy to the stage that is yet to be seen. They are totally skilled and extremely entertaining." – Within Her Words

BEN HODGE
Ben is a comedian, improvisor and performer from Liverpool. Described as 'Relatable and likeable, yet infinitely self-aware' by Blizzard Comedy, Ben has taken his queer-as-f*ck stand-up across the country, from Edinburgh to London, back up to Lincoln and, of course, around Manchester and Liverpool. He is super excited to be making his Bristol debut with Trans Pride South West!

JESSIE JOHNSON
Jessie Johnson has been performing comedy across the South West and her native Wales for several years now, and the keen-eyed among you will recognise her from 2019's TPSW line-up.

MAZ WALLACE
Non-binary hero Maz Wallace is a fresh transplant to Bristol. Having overcome their Birmingham accent, their next greatest challenge is telling a story without getting distracted. Blending personal anecdotes with flights of fancy, their warm and open style is sure to go down a treat.

Headlined by JEN IVES
Jen Ives has been doing stand up comedy for 3 and a half years, and in that short time has reached the finals in the Funny Women Awards 2019 and been nominated for various awards including Leicester Mercury Awards 2019. Jen is known for her often sideways look at what it means to be a trans woman today, as well as mischievous takes on her family, gay rights, self image & whatever else is on her mind. She was recently featured in an article for The New York Times - about trans comedians in Britain.

Jen is currently performing work in progress run-throughs of her debut hour "PEAK TRANS" which focuses on the growing "gender critical" movement in the UK. She is doing this in lederhosen. She does a podcast under the same name that was featured on BBC Radio 4 Extra recently. She is also the co-host of the TRANS LOBBY podcast.

She has recently written for BBC Radio 4 Extra, Dave, Pulped, as well as writing & performing in the multi-award nominated SeanceCast for HatTrick Productions. She has also written and starred in a sketch for Channel 4.

Due to the content of some of the amazing acts, this night is 18+.

Please book in advance online to avoid disappointment on the night!

-------------------------
ACCESSIBILITY
Due to the nature of the building, Zed Alley is unfortunately not fully accessible to those with mobility issues, as there is a step inside the venue.

If you have any worries or concerns about attending, or about someone you know attending, please get in touch with the venue: https://www.hogganspromotions.co.uk/zed-alley

Get in touch! Email us at hello@tpsw.co.uk. 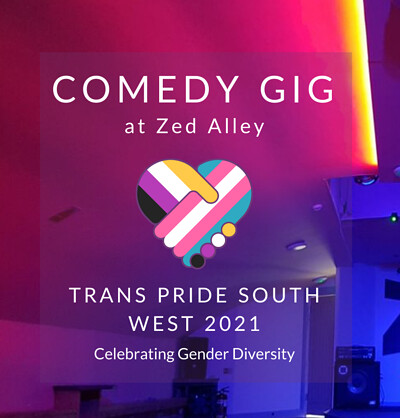