Search on Google and you can find tons of generic articles about Bristol's music scene, it's quite likely this will become one of them.

The quality of Bristol's music scene is not some hidden gem, it's well known and admired around the UK and in some cases internationally. It may not be as firmly on the map as say Berlin, New Orleans's or Detroit, but Bristol has a sound which is something both unique and special. People travel to Bristol for its music scene and for many (including myself) it may be the primary reason for moving here. There's clubs and live music in Bristol which are unrivalled (with or without the dubstep). It's difficult to imagine The Island (aka The Old Firestation)'s Invisible Circus (aka Carny Ville), Cosies' reggae Sundays or even Lakota's 5 rooms of filthy rave, having spawned from a different city.

In March 2010 the PRS foundation published the results of a nationwide survey and declared Bristol 'The UK's most musical city'. Was this information useful? Not really. The survey considered the ratio of Bristol musicians and producers which to be fair is interesting, however it's not exactly a measure of the strength of a music scene. For example alongside Bristol, the 'top 5' included the earth shattering Wakefield and Cheltenham. Still there's nothing like a statistic to trigger a plethora of generic articles on Bristol's Massive Attack, Portishead and Roni Size music culture and just how significant trip-hop is here in the west country.

Most musical city or not, Bristol's music scene is powerful, thriving and just as importantly - evolving. Take a look at the google search trends below for dubstep and drum & bass in Bristol or consider the gypsy, balkan and klezmer influences found in 'festival' bands which a few years ago would have still been on the industry's (former?) standard – a dub, reggae or ska tip. Bristol is with, if not ahead of, the UK's live music trends. 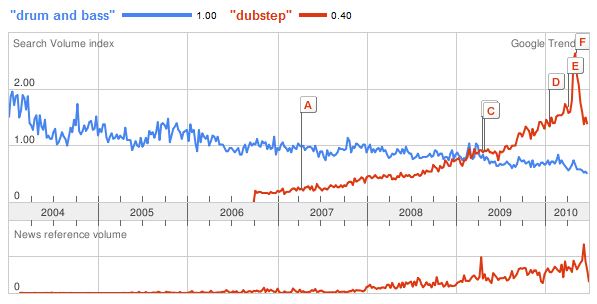 I've been keen to provide some solid information on Bristol's various music scenes for sometime now and with the help of some kind (and impartial) Bristol folk I've put together the following resources for going out in Bristol. For each category I've tried to summarise some history past to present, consistent venues and whats on where and when. For example for Bristol gig listings and the Bristol live music scene: