Lightforms is a new club night showcasing special talent across Bristol with a focus on house and techno music. After a year in the game, Sweet Dreams team up with The Library to provide a selection of talent across a spectrum of selectors, producers and labels within Bristol.

Mixing music and mastery, art and acid, stepping into Light Forms is progressing into the unknown, mirrors, lights and confusion. Basement 45 as you've never seen it before.

Sweet Dreams go into this event after their last event which featured Birmingham producer AFTAHRS, alongside their residents. After putting a stamp on the deep focused minimal house genre in Bristol, they team up with The Library for a February bonanza across different sub genres.

Leaving the sunny shores of Swansea behind, The Library are back and now based in Bristol. Having brought artists such as Riva Starr and Pax to the Welsh coast and supported artists such as Camelphat and Ejeca along the way, we are now poised and ready to show a new city our new direction and what we are all about.

Firstly, we are delighted to welcome, Hywel Gregory, owner of Eminent Agency, a very educated selector within Bristol to open things open for us. He'll be taking into the evening with weird and moody ambient sounds prepping everybody for a night of bright lights and obscure music.

Eksish is a sure go to for all things minimal, and is an exciting, up and coming DJ who will be providing headline beats in Basement 45's main room through their Funktion One System. A DJ who is appreciated from people all over the globe, her dedication to music and all round knowledge makes her the perfect person to lay down some deep sounds in the tunnel style main room.

Joining Eksish and Hywel, we have a determined selector/producer "Papa Kranich". Almost a decade of experience behind the decks and the past two indulging in Bristol's raw and modular techno scene. This in mind, Papa Kranich is now armed and ready with an artillery of techno to impose his will in the scene. Expect a moody and industrial set laced with inspirations from trance and eastern European techno.

Alongside these two selectors we have both label owners for The Library, and Sweet Dreams. Red Jasper is beginning to adopt sounds across all sub genres of house music, from minimal deep grooves to heavier tech house rhythms. Partnered with Raven Krista (The Library), a techy wizard behind the mixer with his keen passion for extended grooves and dancefloor knowledge, these two will meet head to head to join this deep and heavy main room line up.

Strictly yes co-owner and one part of the exciting trio Minuteman III, Erich M3 slows down the tempo from his usual high energy pace to provide us with special selections of slow chugging house and techno.

We also are honoured to have Jack Keo and william joining us on the line up.

As stated, the line up includes: 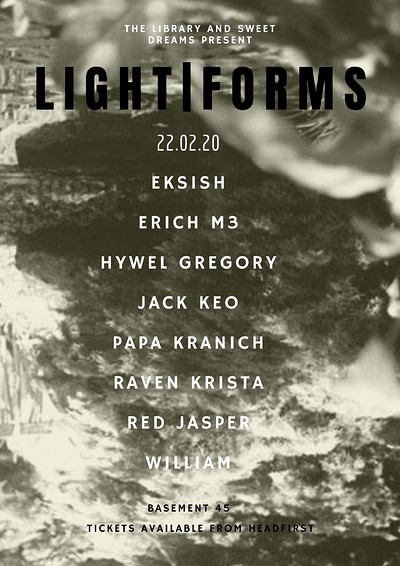