— Basement 45
The gruesome Disco Undead saga comes to a thrilling conclusion with this, the final chapter of the series.
time:22:00
price: £6 advance from Skiddle / £7 on the door

Featuring two rooms of monstrous party music from disco, bassline and breaks to jungle, DnB and beyond. Bust out your best Halloween fancy dress for maximum respect and cheaper entry. The best dressed ghoul will bag themselves a prize bundle.

Prizes on offer include a bottle of premium Skull vodka, matching shot glasses, a boxed blue ray of the Evil Dead Trilogy and a personal portrait of you in your costume painted by internet artist Jim’ll Paint It.

As ever the action will be taking place in the suitably macabre vaults of Basement 45, complete with blood curdling decor and a brand new Funktion-One sound system.

Fully qualified with a PhD in old school filth. Prep yourself for some vinyl-only surgery.

Hip hop, funky breaks and everything in between. For those who like bangers with their mash-ups.

Raw and funky party tunes from the night’s co-host. Selected on the fly. 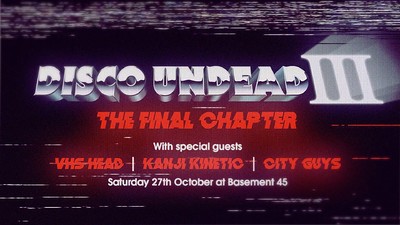