Headliner MISS EAVES is the feminist sound storm of Brooklyn. Fierce femcee electro-pop-rap-dance-explosions celebrate confident women who aren’t afraid to love themselves and own their sexuality — all with a take-no-shit attitude that pushes back at the patriarchy, haters, and anyone else who tries to keep her down. And the world has taken notice: Miss Eaves has been lauded by The New York Times, NPR, Billboard, New York Magazine, Elle, Glamour, Jezebel, and more, with her viral sensation “Thunder Thighs” landing on lists of feminist anthems alongside legends like Beyonce.

2017 saw the release of her first full-length album, Feminasty, (also produced by KEISHH) which quickly became a favorite of the summer and included high energy, body positive hits like the previously mentioned “Thunder Thighs,” along with “Fuccboi Salute,” an anti-fuccboi anthem, and “Hump Day,” which was featured in season two, episode three (“Hella Open“) of HBO‘s hit show Insecure, starring Issa Rae. Her latest EP, ME AF, was released on August 3, 2018 and covers themes like living a happy single life and embracing your pubic hair.

In 2019 Miss Eaves returns with a three-song EP called Sad that deals with love in the digital age, being a homebody, and the ridiculousness of working for “exposure.”

Booty Bass DJ's NGAIO, Devolicious and Bungzo will be spinning tunes alongside much loved Bristol-based collective KIKI started in 2017 seeing a need for a space for LGBT+ People of Colour. They host monthly nights that range from socials, clubnights and film nights and we are proud to be working with them to create a climate of celebration and recognise the intersectionality and diversity of the LGBT+ community.

Tickets are limited so get them while you can! 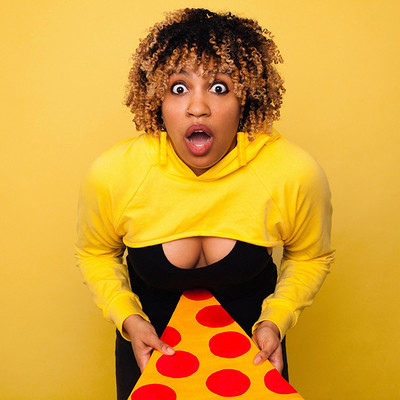