*RESCHEDULED*
This event will now take place on the 25th of July starting at 5pm!!! BOOM!
Thanks for your patience and understanding.
Big Love to all wrigglers,
~ WDC xx
-------------
Yes yes, it's been a long time coming - but here we go! We're over the moon to be able to announce the return of one our favourite bands of recent years, Electric Jalaba! Their unique sound fuses traditional Gnawa rhythms and melodies from Morocco with flavours of psychedelic rock, dub, jazz and electronics. There really isn't another band which sounds like these guys! Having just dropped a fresh LP on the almighty Strut Records, they're on top form and we can't wait to welcome them back to Bristol. On DJ duties we’re very lucky to have a set from Mazen & Vish (Dar Disku), bringing the finest in his selection of Arabic Disco, Rai, Zouk and Afro-Disco + more. Warming up the decks to start the night off is our very own Nathan Worm, with his wide ranging selections, everything from leftfield electronic oddities, to jazz, psychedelic or Afrobeat, anything goes! Read on for more info...

Electric Jalaba comprises six accomplished musicians with an empathy that feels telepathic and a groove that immerses. In Arabic, the mother tongue of Moroccan-born singer and guembri player Simo Lagnawi, a leading practitioner of Gnawa music in Britain, they call this indefinable quality, “El Hal” – “The feeling”. “It’s the feeling that comes when we’re playing and totally forgetting where we are,” says producer and bassist Olly Keen. “The feeling of being grabbed by the music and lost in the groove.”

El Hal is the new third album from Electric Jalaba and their first release in five years, on the famous Strut Records. It’s a multi-faceted work that finds the band tighter than ever, deploying a vast cache of influences across nine tracks improvised and developed in their south London studio then deftly produced by Keen. Some tracks pay homage to the origins of Gnawa music, whose repertoire of Arabic-language praise songs contains remnants of West African dialects – Bambara from Mali, Fulani and Hausa from the Sahel region – that point to a centuries-old migration.

“Their most impressive work to date. A wonderfully visceral record.” Future Music

“A strong album that is exploratory while remaining well rooted in tradition.” Songlines 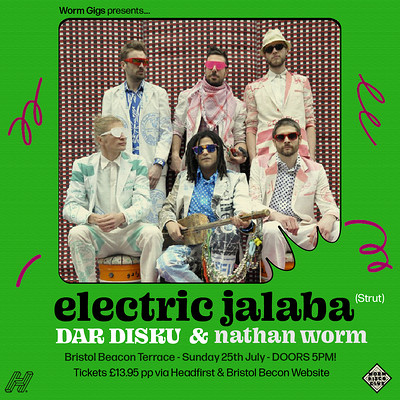