This time around we’re lowering the tempo and delving into more rhythmic territories.

Joining us on the night:

UK Funky rebirth forerunner DJ Motu has had a big couple years. Releasing multiple smash ep’s on Roska Kicks & Snares, alongside remixes for Afro B, Arma and many more.

For this set we’ve paired DJ Motu with past collaborator Killa P (who needs no introduction).

Killa P is no stranger within the Uk Funky scene with numerous features within the genre.
We are very excited for this one in an intimate venue.

Another producer at the forefront of the UK Funky revival is Fonzo, whose explosive debut release on RKS Dubz ‘Bowow’ (with fellow producer aaee) regularly smashed clubs to bits.
With collaborations in pipeline with Riko Dan, it’s guaranteed to be an interesting few months for Fonzo. 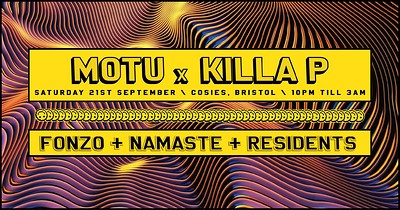