WORKS is a club night for 160bpm bass music. Footwork, juke, jungle, hardcore, and everything in between.

SEPIA has left his mark in the Dubstep scene over the last ten years, being signed to major labels such as: System, White Peach, Infernal Sounds, Wheel & Deal, DD&D, and Green King Cuts. Despite this, his 160 productions are often overlooked, so we have booked him for a special Footwork set. After a delayed flight meant he missed his set back in 2020, this time there's no doubt he'll deliver.


GINA is the owner / founder of Manchester's Lucid Juice, which has been making waves on the scene recently with their club nights. Her Subtle FM show is a excellent source of all things breaks / bass, and her platform is all about promoting an equal, diverse and positive industry that we can all enjoy.


TEE is a frequent collaborator of the infamous Trax Haven, the UK label known for it's rowdy take on 160 with speed garage and breakbeat influences. Responsible for Renegade Master remix that's been doing the rounds, expect a b2b that's going to tear it up.


GOLDMAN, DJ JONCO & DJ LAZERGUN have been busy pushing footwork, juke and jungle music in Bristol since they moved here back in 2019. As well as putting on club nights, their label WORKS Records has just released an EP from one of the footwork OG’s Traxman, and you can catch a glimpse of some of their soon to be released tracks through their new livestream radio platform WORKS Radio. 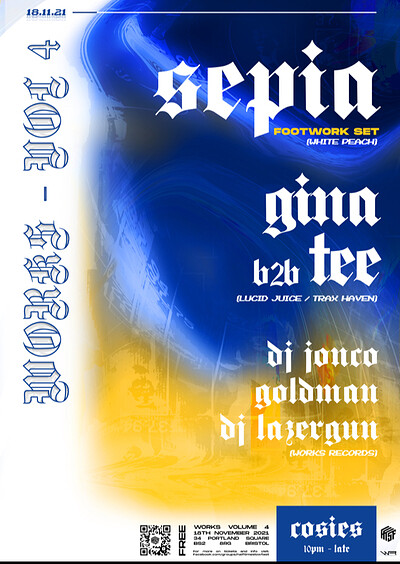