Absolute Body Control returns to Cosies! for our second party which will be a celebration of a new decade and another cross genre trip inside the minds of our selectors.

Red Rack'em had a triumphant 2019 with 3 incredibly well received singles, a new label Disco Banger and headline tours of India, Asia and USA. Described by Juno Records as 'one of the most respected figures in UK underground house circles' with tracks like 'Wonky Bassline Disco Banger', 'In Love Again' and 'WYBES' getting love from the biggest names in the business. He's fully loaded from recent digging trips in Detroit and Chicago so strap yourself in for a funky ride.

Nathan Worm is resident and co-founder of Bristol based jazzy supremos Worm Disco Club who are big news in the UK modern jazz and African music scene hosting power acts Joe Armon Jones, Comet Is Coming, Nubya Garcia and programming stages for Glastonbury and Bristol Jazz Festival. Nathan is a connoisseur of all types of music so expect plenty of UK tinged, jazzy thumps and bumps from him.

Saeph is a young and talented selector hailing the sleepy Cornish town of Saltash. He's bringing a youthful flair to the night with his finger firmly on the pulse of Italo tinged dancefoor smashers and obscure Asian pop music discogs finds. He smashed at the last party with an exciting late night flurry at the end so we're excited to see what he brings this time!

We don't really have a music policy apart from it's good it gets played. But expect to possibly hear some 80s electro funk, Nigerian vibes, broken beat, brazilian, obscure Asian pop, proto house, EBM and much more. As Cosies is centred around turntables, there will be plenty of cratedigging for this event.... 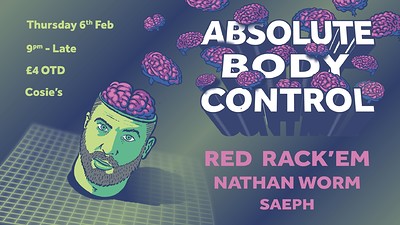