As sunshine leaves Motion’s Lockyard, the party continues at The Crofters Rights. We'll be taking over The Crofters Rights for the first time as our residents party until the early hours, so be there to soak up every minute of dance floor goodness.

iz.wav
With genre-bending selections and an ever-evolving style, iz.wav explores all corners of electronic rave music. From deep and dark extra-terrestrial acid sounds, to fast and erratic broken beats. Expect anything from detroit ghettotech to UK bass, jungle and hardcore. Her sets are aimed at late night, high energy dancefloors.

Glances
Glances are a Bristol based duo whose roots lie in London. Informed by the UK’s rich lineage of body-centric dance music, their dubwise productions have received from support from the likes of Batu, Bruce, Peach, Peverelist and Or:La.

Having plied their trade on the city’s DJ circuit for the last few years, they now hold down a residency on 1020 Radio, and will be hosting a series of shows on Noods Radio. They are also the curators of the “At a Glance” mix series, which is aimed at showcasing leftfield sounds and championing upcoming talent. Past contributors have included Berlin-based Katiusha, Highlife producer Cain, and Bristol favourite Manami.

Suze
Sheffield born producer/DJ, Suze, involved himself in Bristol's scene last year with the advent of his monthly 1020 residency alongside fellow northerner 96 Back. The show sees him move through left of field house, electro and experimental music. Suze's own production have garnered support from the likes of Peach Discs signee, Ciel. 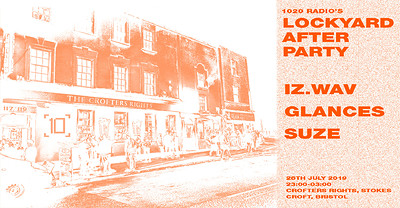