Much time has passed since Kris Baha swapped the parched red earth and searing midday sun of the Australian landscape for the brutalist buildings, communist-era apartment blocks and slate-grey skies of East Berlin. Now firmly embedded in his adopted city, Baha has become known for a trademark production style inspired by sun-baked hallucinatory visions and the clandestine, concrete-clad industrial hum of the metropolis after dark.

Kris is now a regular fixture at celebrated Berlin institutions CockTail D’Amore, Sameheads & Panorama bar. There and during guest spots elsewhere across the world, he dives deep into the void, to deliver extended sets of otherworldly machine music driven by emotion and mood, be it energy, joy, lust or sadness. The same ethos applies to his hardware-driven, performance-based live shows, which were initially inspired by his love for the pioneering gigs of the first industrial music era.

When not channeling the musical spirits to inspire dancers, Baha can be found lurking in the shadows of his studio space. There, he performs mixing, mastering and remix duties for the likes of Boys Noize, Boy Harsher, Red Axes, Die Wilde Jagd, MVTANT, Red Axes +++ . There has also been a noted collaboration with fellow Aussie outcast Dreems as Die Orangen. Yet it’s his own skewed, mutant productions for which Baha is undoubtedly best known. Inhibiting their own sound space between industrial, EBM, wave, post punk, early ‘90s IDM and krautrock.

‘Into The Dark’ is Kris latest original output for 2021, delving into the live music sensibility of Kris’s production skillset, coming full circle to his former songwriting background. The song is a confrontational introspection haunted by anxiety, vulnerability and self examination while trying to hear through the noise over the last 6 months.

‘Into the Dark’ mirrors the feeling of late 80’s / 90’s musical transitional phases in the Industrial/ Wave scene and in some way is reflective of Kris’s current musical direction as he presents himself in a different shade of dark.
Qual

Lebanon Hanover’s William Maybelline solo project. His darker, gloomier and heavier synth electro EBM sound. It has been clear from the start Maybelline always was inspired by the harsher sides of music. It touches on the goth, industrial and even the techno scene. Qual is welcoming a post-apocalyptic nuclear winter. With terror and restless chaos cometh the digital age condemned to be digitally transformed. Cometh hybrids, mutated humans a depletion of organics. 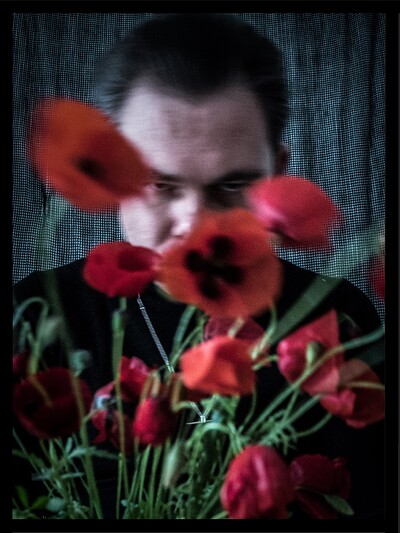