South London's RIZ LA TEEF has positioned himself snugly at the goalmouth of the UK underground circuit. Lauded for his acetate and vinyl fixation as well as superlatively championing that metropolitan fusion of funky, grime, dubstep and UK garage, the kind of rep Riz has reaped thus far is one many selectors and record enthusiasts strive to achieve.

The head honcho of not one, but three different record labels (Yellow Fent, Fent Plates & White Peach), prominent producer and seamless selector ZHA. The labels have seen the likes of Sorrow, Gundam, Kahn, Vacant, Sukh Knight and many more with Zha making a name for himself for recognising talent when he hears it. @whitete is the largest specialist record store for Dubstep & Grime, building up a loyal fan base from all over the world. His own productions pack a punch through his distinctive, Asian focused sound, as can be told by his latest releases on NAAN. Zha has a monthly residency at Reprezent FM and has been frequently featured in Mixmag, Redbull, Duploc, 1Xtra & many more.

Weight watchers out in force. 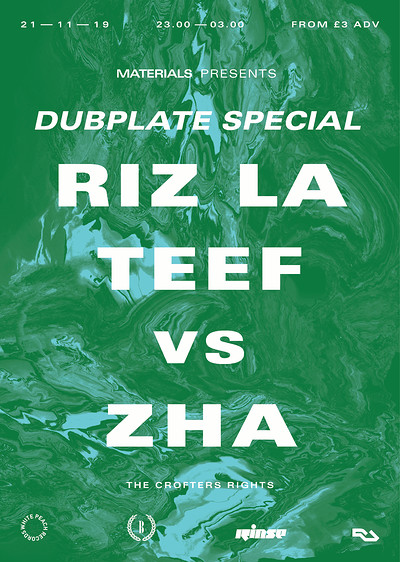