Totality and Pull The Strings are very excited to bring you -

Established in San Francisco, CA in 2002, Enablers' subsequent five LPs and four EPs have signalled a transcendent approach to “Spoken Word” music. The 2019 LP, Zones (Broken Clover, Lancashire&Somerset, and Exile on Mainstream) is a further example of Enablers’ push for musical expansion and growth. Zones represents a band that is increasingly more comfortable with experimentation and improvisation, while continuing to embrace all the musical elements that have established their sound for close to twenty years.

A 15th anniversary re-issue of ‘Output Negative Space’ was released in Nov ’21 and can be found via the Human Worth label while a new Enablers album is just on the horizon released on Wrong Speed Records.

From Jack Chuter’s Storm Static Sleep - A Pathway Through Post-Rock:

(Enablers’) music lands between the slippery harmonic surfaces of early 90s post-rock and the softened elegance of the more modern incarnations of it, the guitars dragged like a ribbon by the elusive poetic imagery of Pete Simonelli’s spoken word.


From Jordan Mamone, writing for Noisey:

Enablers' snaking guitar telepathy is equally distinctive…Joe Goldring and Kevin Thomson (have) refined an intuitive vocabulary of filigreed arpeggios, needling leads, and grand crescendos that roil like the vast Pacific….Simonelli has accomplished that rarest of feats: enhancing slow-burning, noir-ish rock with unapologetic poetry that actually flatters rather than overshadows the songs…(Ospovat’s) improvisational arsenal of rolls, taps, and flutters allows for spontaneity without sacrificing impact.


Drowned in Sound writer Mike Diver described them as "a confrontational band, a visceral beast of eight legs and one mouth that never quits, its stream of freeform hang-loose lyricism owing a debt in style, perhaps, to literary forefathers".

Haress consists of the core guitar duo of David Hand and Elizabeth Still, based in Bishops Castle in the Shropshire Hills.


They intertwine dark and repetitive electric guitar figures to create a hypnotic, mantra-like state, the playing working on a kind of unspoken telepathy until it’s impossible for the onlooker to work out which player is responsible for which sound amid the warm, enveloping hum of valve amps.


This large ensemble loses none of Haress’ intimacy and instead decorates the songs with sympathetic colour and light. The results are lovingly rendered and share a genuinely magical recording process with the listener, allowing them to experience the same moments of surprise as the band did when committing this music to tape.


‘Ghosts is an incredible piece of work and posits Haress on their own when it comes to developing new approaches to traditional musical forms.

The music contains many moments of immediate joy - the relative pop of House’s vocals on White Over, the wild horns of I Think I Think, the rush of warmth as Time To Drink morphs into focus. But it also stretches the sound Haress have carefully developed almost to breaking point with sections of music that feel like somebody - something - else is steering the ship.’

As an instrumental three-piece Olanza have long explored the interplay between loud winding guitar work and heavy technical drum rhythms. In recent times Aron Ward (Repoman, Harpoon) and Shaun Sepr (Five Knuckle, Fuk) have been joined by Annie Gardiner (Hysterical Injury) on bass, taking the intricate post rock of Polvo into the weightier region of Harvey Milk and Lungfish. 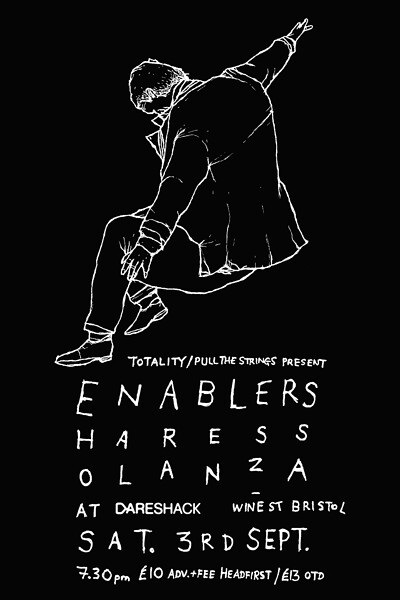