— Exchange
Prepare for a night of party-starting, droned-out-psych, with overtones of raucous sauce and trippy tipples.
time:19:30
price: Headfirst Tickets

Prepare for a night of party-starting, droned-out-psych, with overtones of raucous sauce and trippy tipples....

Glasgow 2-piece ACID CANNIBALS return to Bristol to do the dirty all over, and you are all invited. Be filthy and spread the word, this is all good vibes.

Brand new two-piece / power duo / Buckfast-powered bastard riff machine featuring members of psych luminaries The Cosmic Dead and gutter-grindcore crew DROVES. Expect riffs-upon-riffs, booze-fuelled mayhem and an approach to song craft like ZZ Top in a prison riot. Think half of Bad Guys, but on a really, really bad day.
Debut 7” EP, ‘Why Not Every Night’ out now via At War With False Noises Records.

With their unrelenting pscyhedelic-tinged doom, Headless Kross, a three-piece drawn from the depths of Scotland's underground music scene, have made it their mission to provide us with a monolithic soundtrack as we trudge towards the End Times.
Viscious, primal, unforgiving – it's no coincidence that they called their punishing debut album 'Bear' their ferocity deserves to be compared to no lesser a creature. But Headless Kross are not merely vessels of bestial noise - they are blessed with a higher state of conciousness that allows them to transcend this Earthly bind and take the listener on a celestial exploration of rock's outer limits - where they transmit riffs so perfect, lesser mortals are driven to invade the stage and try and steal the notes for themselves like a backwards child snatching at glittering sunbeams.

So don't make the mistake that fool Christ did - when they come to your town, genuflect before the Headless Kross and hope that the machinery of their unrelenting musical juggernaut will spare you your pitiful fate.

Based in Dublin, Ireland, WILD ROCKET have developed a heady combination of heavy psych and kraut-infused space punk. Since the release of their debut LP Geomagnetic Hallucinations in 2014 and their sophomore LP Dissociation Mechanics in 2017, the band have kept going from strength to strength, performing at the Distorted Perspectives, Body & Soul and Reverberation Festivals in Ireland and the Hostsabbat Festival in Norway. Wild Rocket have shared stages with internationally renowned contemporaries such as Slomatics, Ufomammut, Earth and The Cosmic Dead. 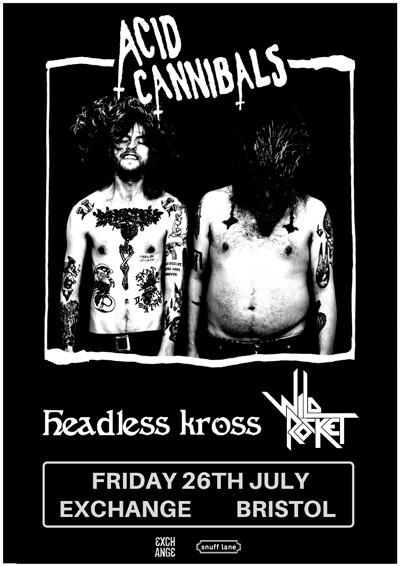