Electric Litany at Exchange
With No Feathers

Electric Litany bring their dark and atmospheric post rock to Bristol for the very first time this November.

“Bleak and broody music has never been quite so thrilling.” -The Guardian
“I said to myself, ‘they could be the next Radiohead'.” -Alan Parsons, BBC Interview
“Brooding, brusing piece of post punk with deeply lo-fi attitudes. There’s a beauty to their melancholy.” -Clash magazine
“Music worlds collide with Electric Litany... Synthy, melancholic, etherealism.” -Nick DeRiso

Electric Litany is a London-based four piece whose music incorporates sounds of post rock, synthpop, neoclassical, electronica and experimental soundscapes. In their formative years, founding members Alexandros Miaris and Richard Simic lived and rehearsed in abandoned buildings across East London, and recorded their debut album “How To Be A Child and Win The War” in 2010 in a North London church.

Success of this album led to a support slot with Interpol on their 2011 European tour and caught the eye of legendary producer Alan Parsons, who produced their second album “Enduring Days You Will Overcome” in 2014.

In July 2015 Electric Litany were asked to perform in Sytagma square in front of tens of thousands in Athens, Greece during the protest against austerity. The next day they performed on the main stage at Rockwave festival alongside The Prodigy and Black Rebel Motorcycle Club.

In 2019 Electric Litany released their third album “Under A Common Sky”, which features tracks ‘Sealight’ and ‘Refugee’, both receiving numerous awards for their music videos.

Electric Litany re-entered the studio this year to begin work on their new EP “Music for Sleep”. The largely improvised recording is inspired by dreams and showcases a more delicate approach in its instrumentation. Piano, double bass, drums and modular electronics weave a beautifully complex and constantly evolving audio experience.

Support will come from No Feathers, known for their energetic live performances that combine diverse textures, intricate grooves and varied time-signatures with infectious melodies and a polished pop aesthetic.
--- 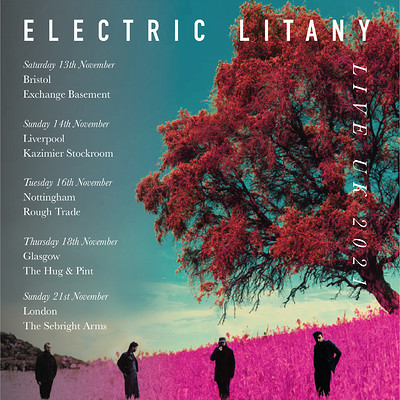