— Exchange
PHAT Bristol are delighted to present The Makings, with support from Dalmas
price: Headfirst Tickets

PHAT Bristol are delighted to present Bristol based 7-piece THE MAKINGS, with support from hard hitting Manchester trio, DALMAS.

THE MAKINGS - Formed in Bristol in 2019, The Makings are a stadium-style gospel rock band, rooted in classic soul-funk but with a raw, contemporary edge, brought to life by an evolving portfolio of daringly original compositions.

Pushing boundaries rather than being confined by them, their deep-groove sound coalesces around jazz-tinged shuffles, bluesy guitar riffs and sassy vocal stylings, all locked together by a fluid yet rock-solid rhythm section. This synergy of sound fuses with raw lyricism and refreshingly candid songwriting. The result is both intriguing and uplifting.

DALMAS - Hard hitting Manchester trio Dalmas - made up of singing drummer George Farrar, Jacob Maguire (guitar) and Augustus Clark (bass) - are rapidly making a name for themselves in all corners of the UK, gathering acclaim from local and national media along the way.

Dalmas return with their newest single ‘Is This Love’ on Native South Records, released on the 17th of September 2021. After the release of their debut EP ‘Stay' in March supported by BBC 6 Music, George, Jacob and Augustus have teamed up with California based producer Jonathan Smith to collaborate on their new single. Taking inspiration from the likes of Biffy Clyro and Nothing But Thieves, this is a new direction for the band with sounds influenced from 80’s pop classics infused with live rock elements the band is known for. 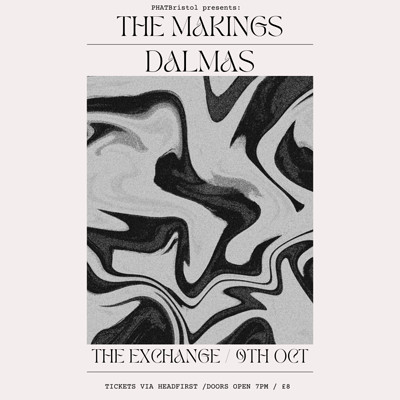