Mugstar are the sound of 10,000 suns exploding, pulsing and repetitive beauty, sounding like a sonic mantra. Mugstar set sail for the sun in 2002 and have completed numerous voyagers with the likes of Mogwai, Melt Banana, Oneida and Acid Mothers Temple.
Their tireless work ethic and astonishing, internationally renowned, live performances have earned them a much deserved status as cult heroes. Their first single ‘Spotlight Over Memphis’ caught the ears of late and great radio legend John Peel, who later went on to record them as his last-ever Peel Session in 2004. A subsequent string of singles, EP’s and several full-length albums make up the band’s back catalogue, not to mention a split release with Mudhoney, one with Oneida (on Rocket Recordings) and a collaboration with Damo Suzuki (on Important Records).
“Magnetic Seasons”, their last album for Rock Action Records (the Glaswegian label run by Mogwai) sees Mugstar shifting through a whole range of newfound sonic gears. With fresh layers and swathes of texture stretching out a much broader aural vocabulary than is often permitted during their explosive live shows, “Magnetic Seasons” is a game changer for Mugstar, in terms of its fluidity and its breadth of moods and emotions locked within the songs.

“Remember that childhood game where you'd cross hands with a pal and spin until someone falls over and smacks their head on the pavement? Magnetic Seasons feels like that; guaranteed to leave you cross-eyed...” - The Skinny

“Music fit to accompany you across oceans or deep into space. Don’t let the ship go without you.” - Louder than war

"Theirs is a breathless and joyful journey, where the drums and the riffs interlock in dynamic union to push forwards and ever onwards, an essentially punk aesthetic that says ‘don’t fuck about, don’t bore the listener, take the fucker by the throat and speed on down the road’." - The sleeping shaman 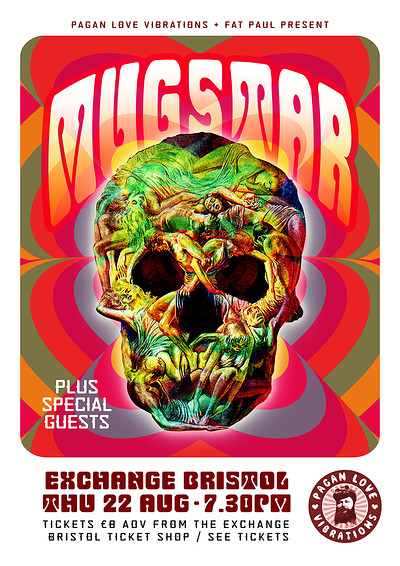