Few groups better captured the heart and soul of roots reggae than the Abyssinians; the vocal trio's heavenly close harmonies, dark melodies, and Rastafarian themes, all delivered with a deep spiritual feeling, were instrumental in defining and refining the genre.

Bernard Collins and Donald Manning were longtime friends, and neither initially planned a career in music. That all changed one night in 1968, when during a creative burst, the pair composed "Satta Massa Gana" (also spelled "Satta Amassa Gana"). Proof of their Rastafarian devotion is found in the title, which is Amharic for "give thanks and praise", Amharic being the language of Ethiopia.

The Abyssinians released three further hit singles in 1971. First up was "Declaration of Rights," and never has a call to revolution sounded so sweet and heartfelt. The equally evocative "Jerusalem" also appeared in 1971, and completing a quartet of hits for the year was "Let My Days Be Long." Over the next few years, the trio continued releasing excellent singles, both on Clinch, as well as recording for other producers.

However, in a musical scene renowned for its prolific output, the Abyssinians recordings were now to come few and far between, at least by Jamaican standards. But what records they were: 1972's "Leggo Beast," a simmering blend of deep roots and soul, and the deeply religious "Yim Mas Gan," excellently produced by Lloyd "Matador" Daly, were just some of the more notable.

The trio finally cut its debut album, Forward Onto Zion, in 1976, with producer Clive "Azul" Hunt. Including hits, re-recordings of older classics, and new material, the record remains a roots masterpiece and brought the group international acclaim. 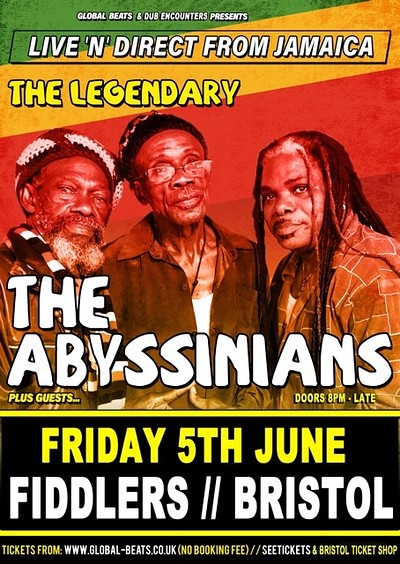